So I’m building a Strat for Mike, which is why I’ve named this thread “Mikes Strat”. I’m clever that way 🙂

I’ve done several build blogs for Strats in the past and stated that I wasnt going to do another. How many builds of what is essentially the same guitar can you look at with any real interest?

This time, though, its not a standard Strat so I decided to make another 🙂

We’ll still have the traditional Stratocaster body and headstock shapes, but thats where the similarities end 🙂

This guy will have a bookmatched quilted maple top, no pickguard, a rear routed control cavity, direct mounted pickups, a single volume and tone, and an Original Floyd Rose tremolo.

The colors will be like those shown at the bottom. Light blue to dark blue to black burst with a natural edge accent. On other guitars this might be called “faux binding” but since it will essentially be an accent strip well over the edge of the roundover its not really binding-like, so we’ll just call it an accent stripe 🙂

Additionally, instead of standard dots on the fretboard I’ll be doing bird inlays like the ones I used on my earlier 22 Magnum prototype. 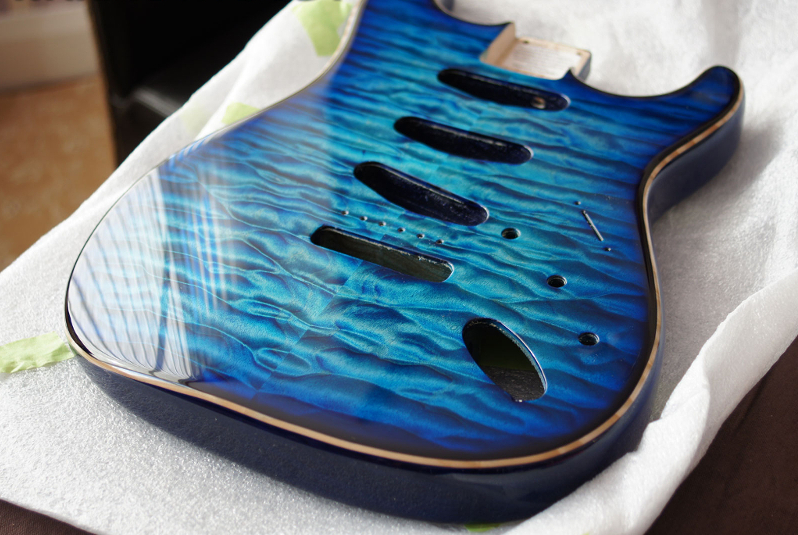 First up, this is the replacement block for the Floyd Rose trem. This guy is made of solid tungsten carbide.

Tungsten carbide is 71% denser than lead, and is one of the hardest materials in existence. It is substantially harder than titanium, registering a 9 on the Mohs scale of mineral hardness (compared to titanium’s score of 6)

So what does this mean when talking about a tremolo block? Well, one fact of floating tremolo bridges, is that due to less body contact, and the fact that the bridge can move, it tends to absorb energy from the strings and dampen their vibration and thus you have a lot less sustain when compared to fixed bridges. By replacing the standard block with one made from tungsten carbide, you essentially add a lot more mass to the bridge while retaining the exact same dimensions. Consequently, it takes a lot more energy to make it move. Energy that the strings vibration doesn’t really generate. Since the bridge is harder to move, it saps a lot less energy from the strings and brings back a lot of the sustain thats lost with a floating bridge. 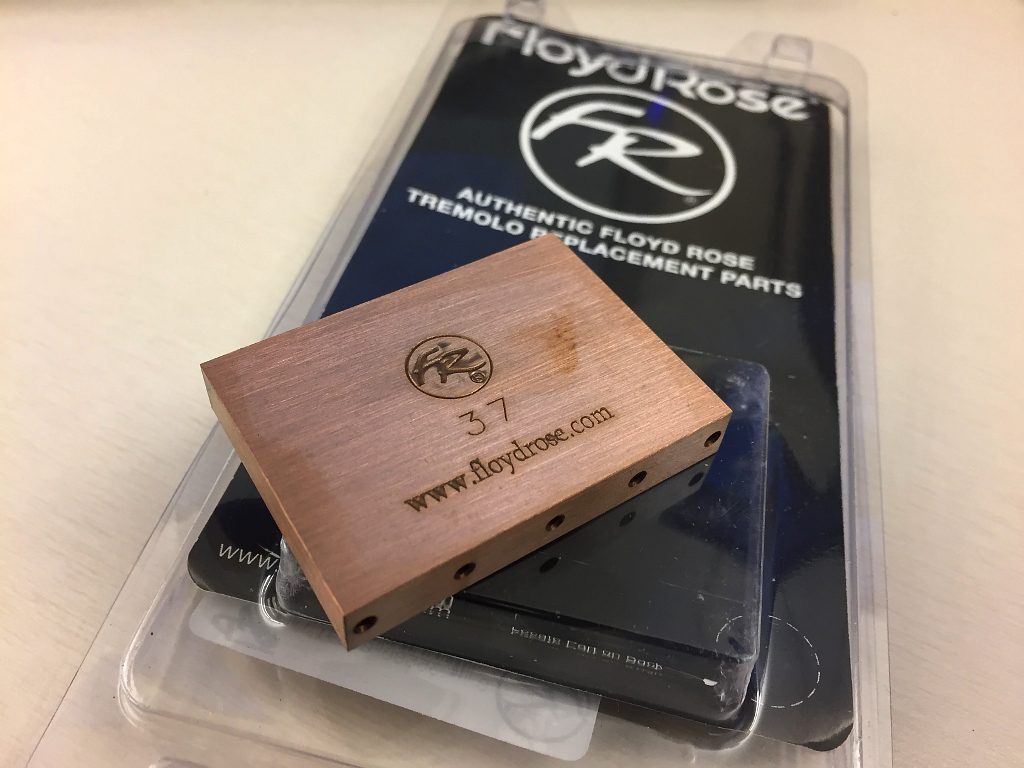 Hot Rod double-action truss rod. This will be installed inside the neck under the fretboard. This allows you to adjust the neck relief when setting the action of the 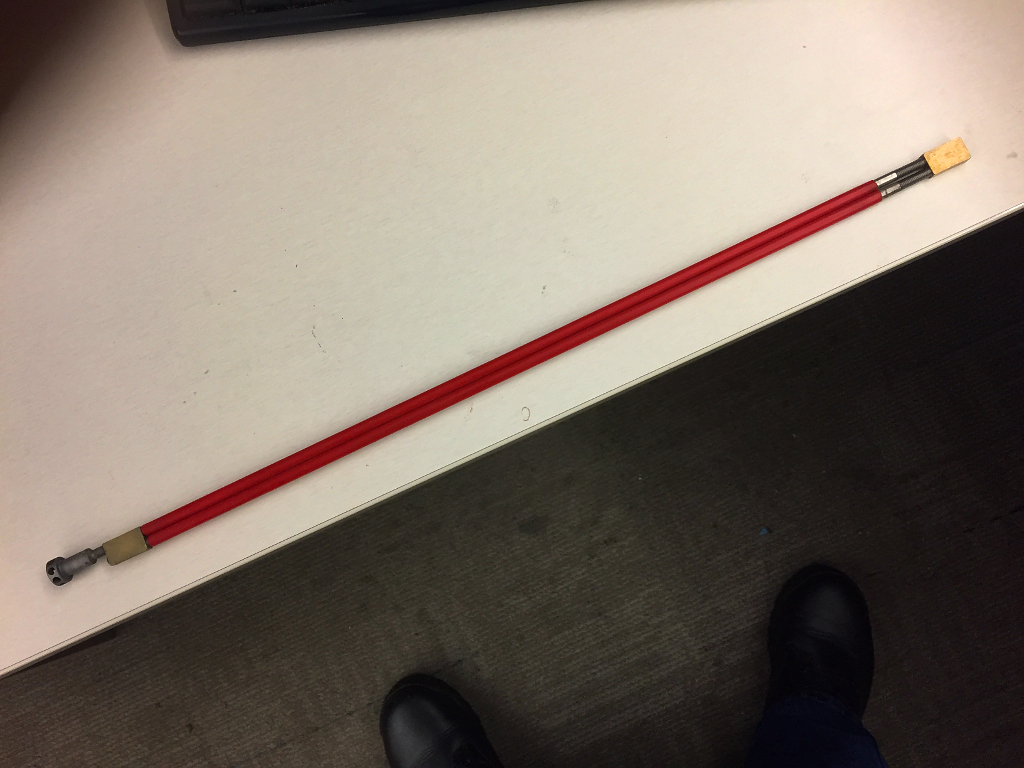 This is called a spoke wheel adjustment. Access is at the body end via a notch in the end of the fretboard. Much more convenient than many traditional Fender necks where you actually have to take the neck off in order to adjust the relief. With this rod you can easily adjust relief while the neck is on and under string tension 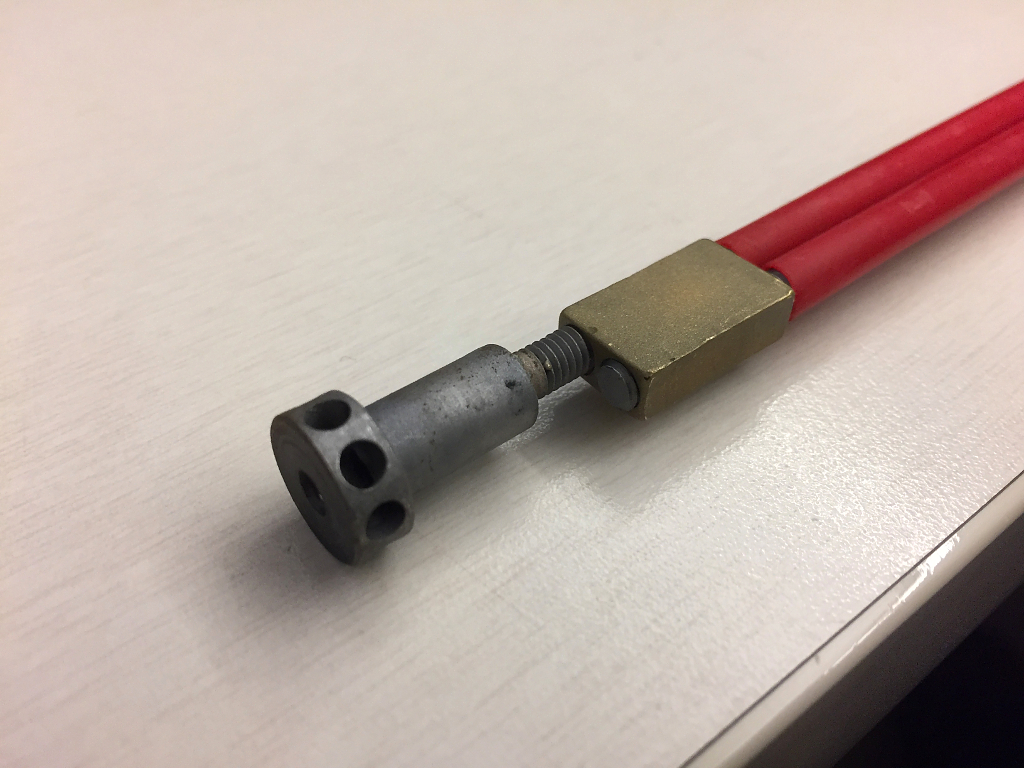 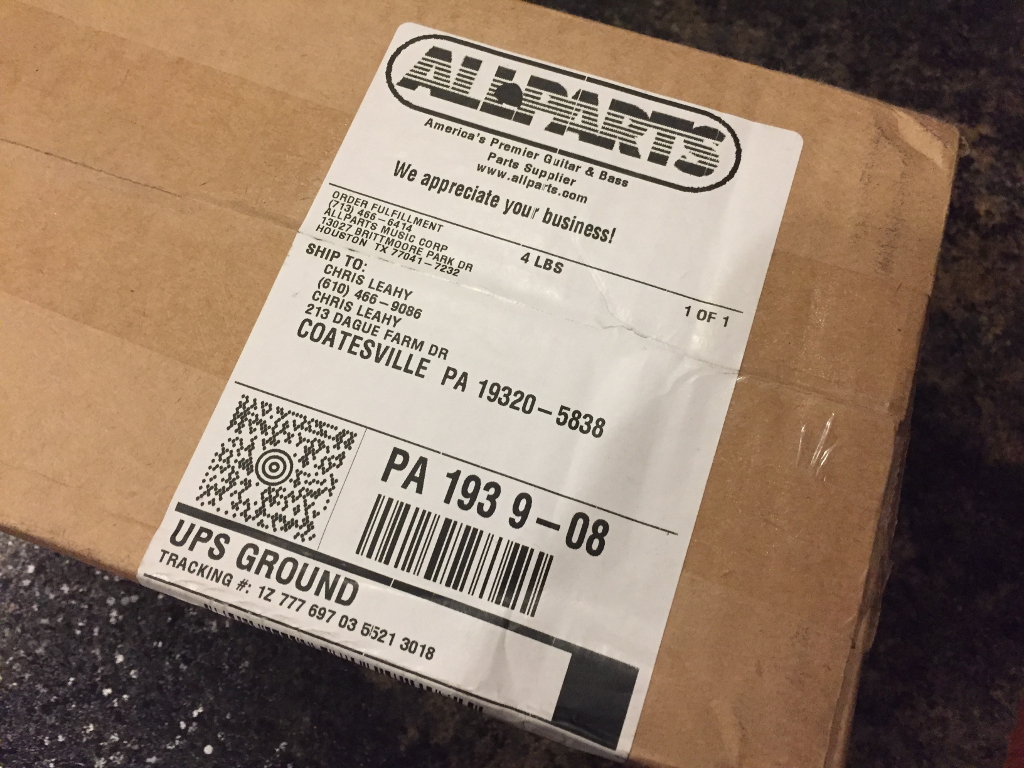 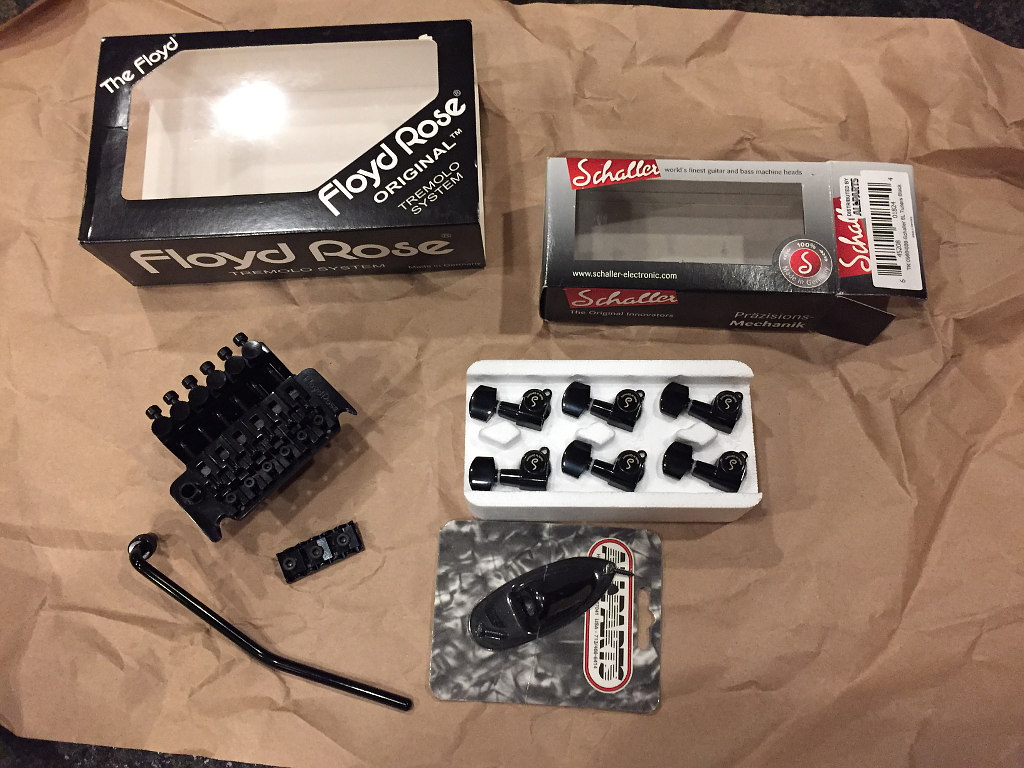 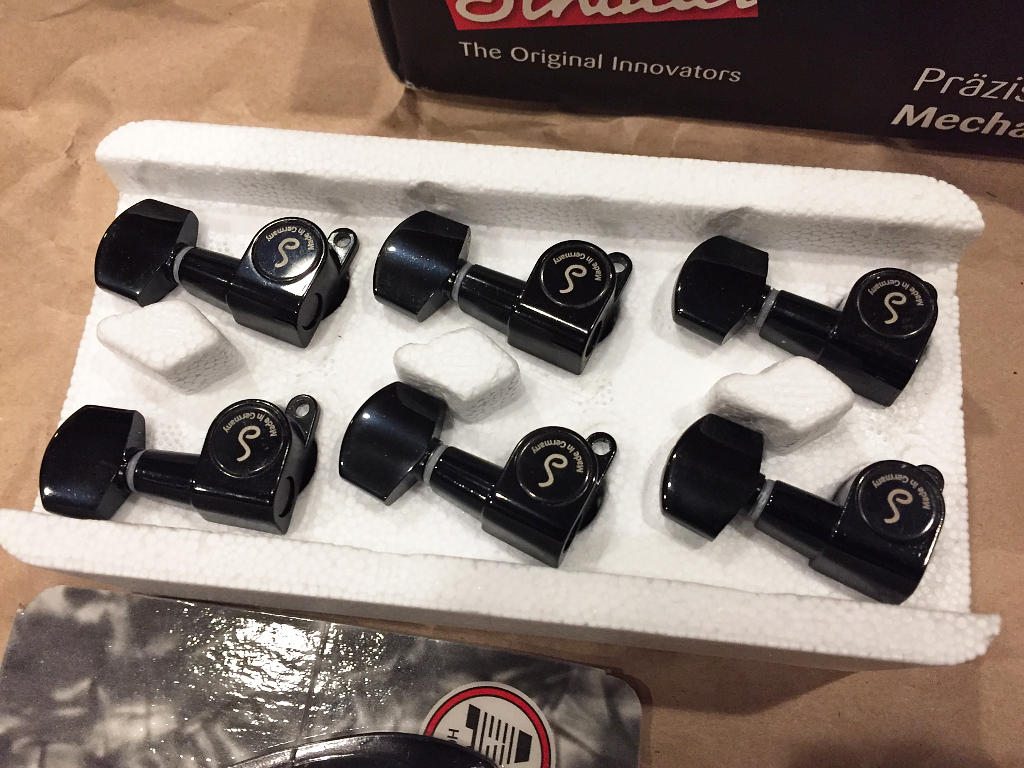 Small parts. CTS 500k potentiometers and an Orange drop .047 uF capacitor. Normally you would expect 250k pots and .022uF cap in a Strat, but this is to be no ordinary Strat. The pickups in this are going to be Seymour Duncan Hot Rails, which are high output humbuckers, but in a single coil size. These pickups call for the higher value electrical componants 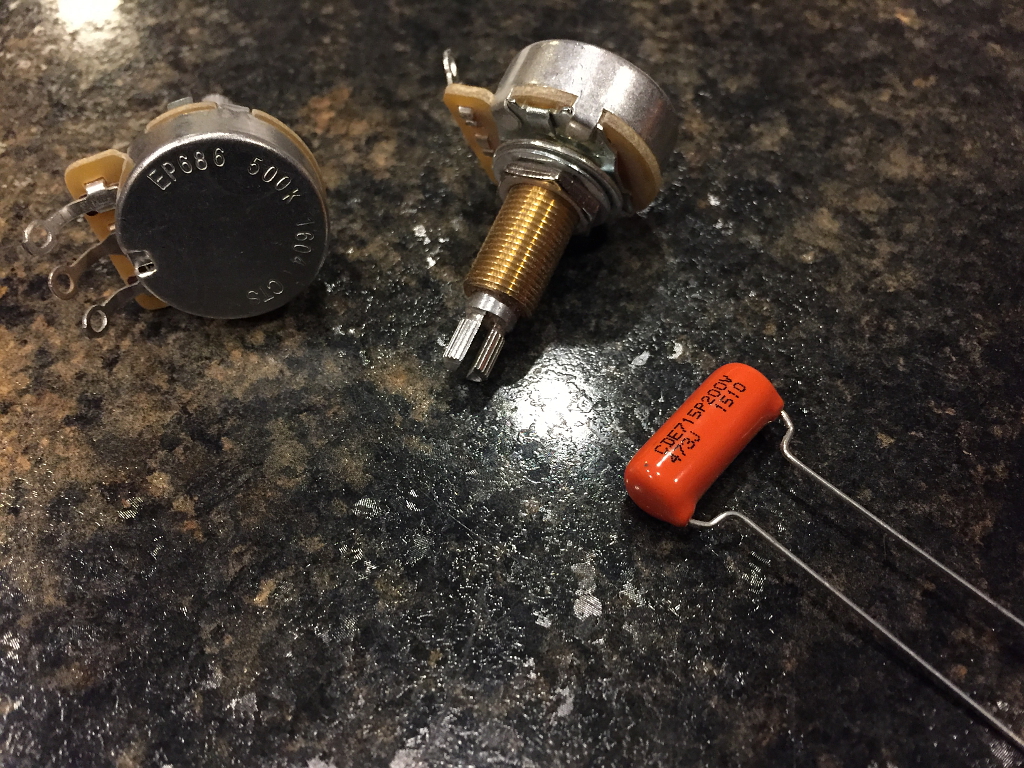 Look what the wood fairy delivered! A big-ol honkin hunk of swamp ash. This will be the body 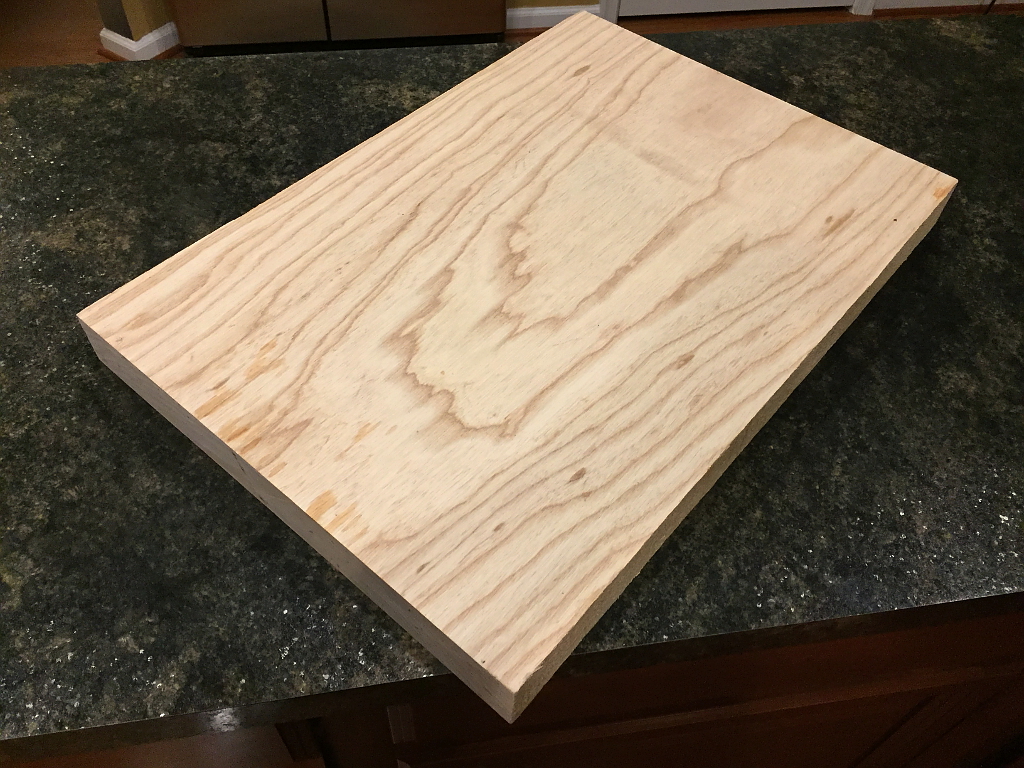 From my own stock, a slab of flat sawn rock maple. Dont be deceived by the color. The outside is dried and oxidized. Its been seasoning a couple years in my shop. Once I plane it down it’ll be as white as you would expect maple to be. This will ultimately be the neck of the guitar. Well, several necks actually. 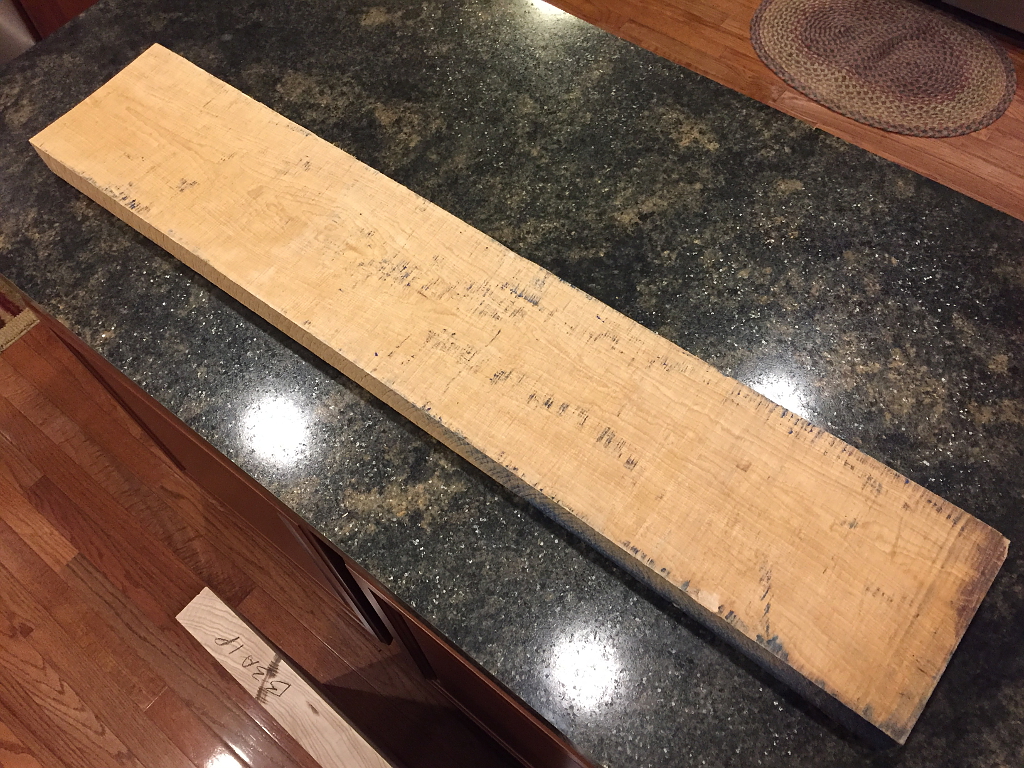 A gorgeous piece of east Indian rosewood. This will be the fretboard. 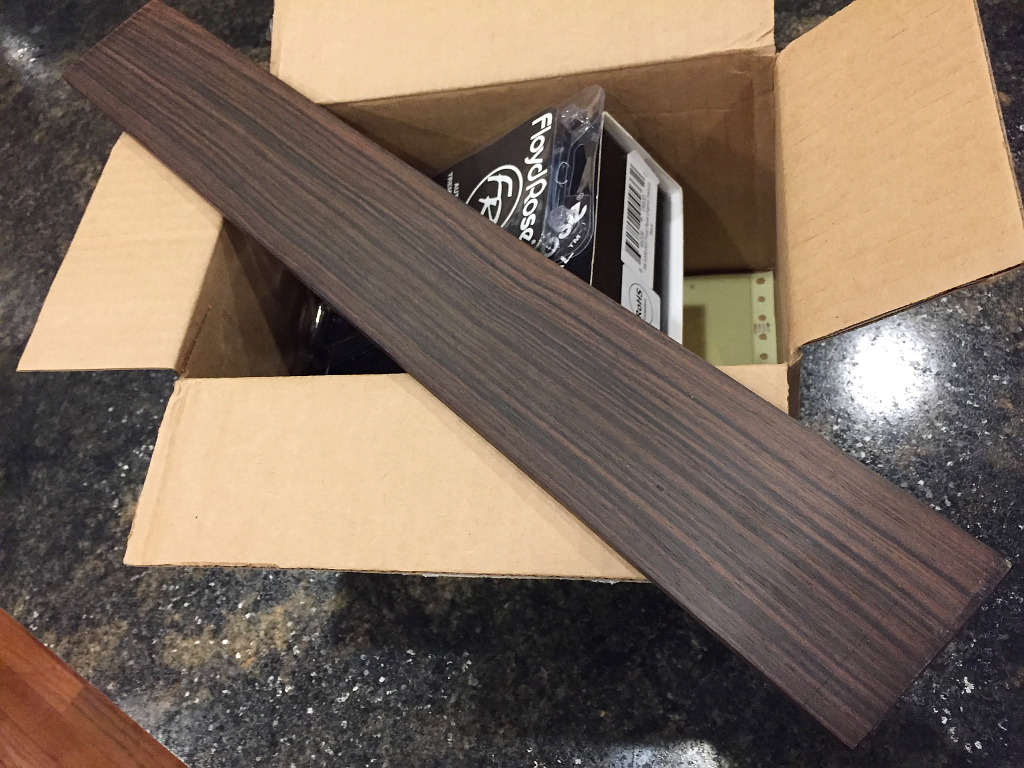 The last of the wood, but certainly not the least. This is an awesome piece of quilted maple. Dont be deceived by the bumpy appearance, this is flat and smooth. The figure in the wood makes it look that way. I’ll be making a book-matched drop top for the body from this slab of wood. 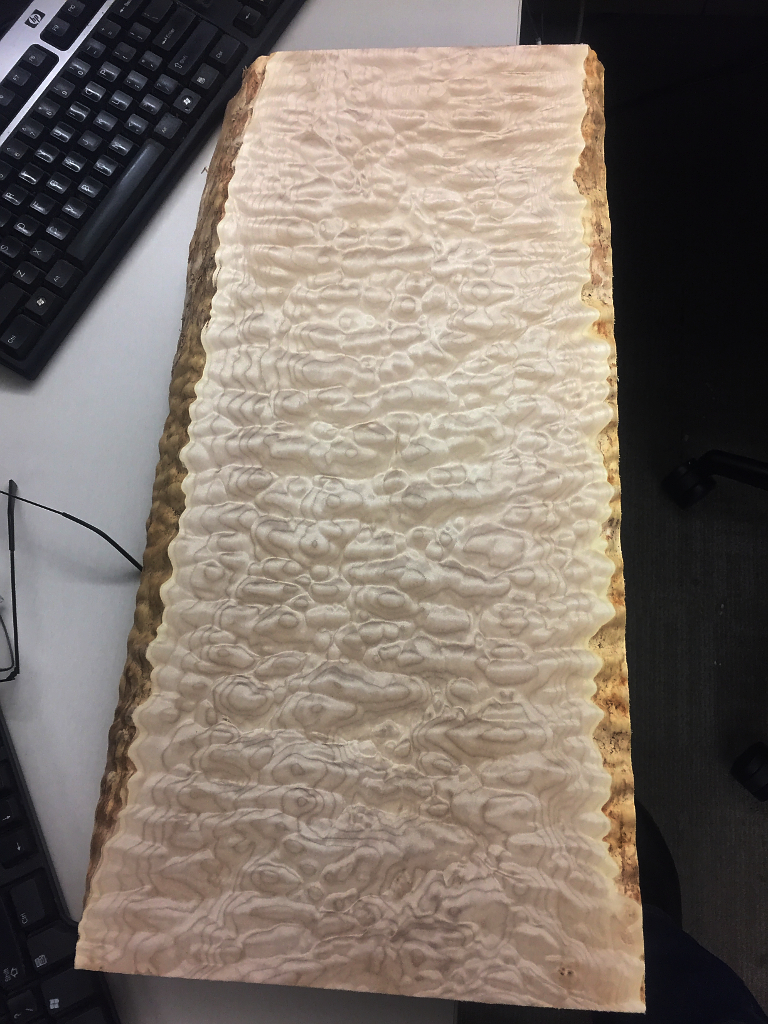 Carbon fiber rods. Two of these will go into the neck. They enhance rigidity as well as providing a “memory” of where the neck should be with regard to straightness. They do bend, but want with all their heart to return to their original state and always try to do so 🙂 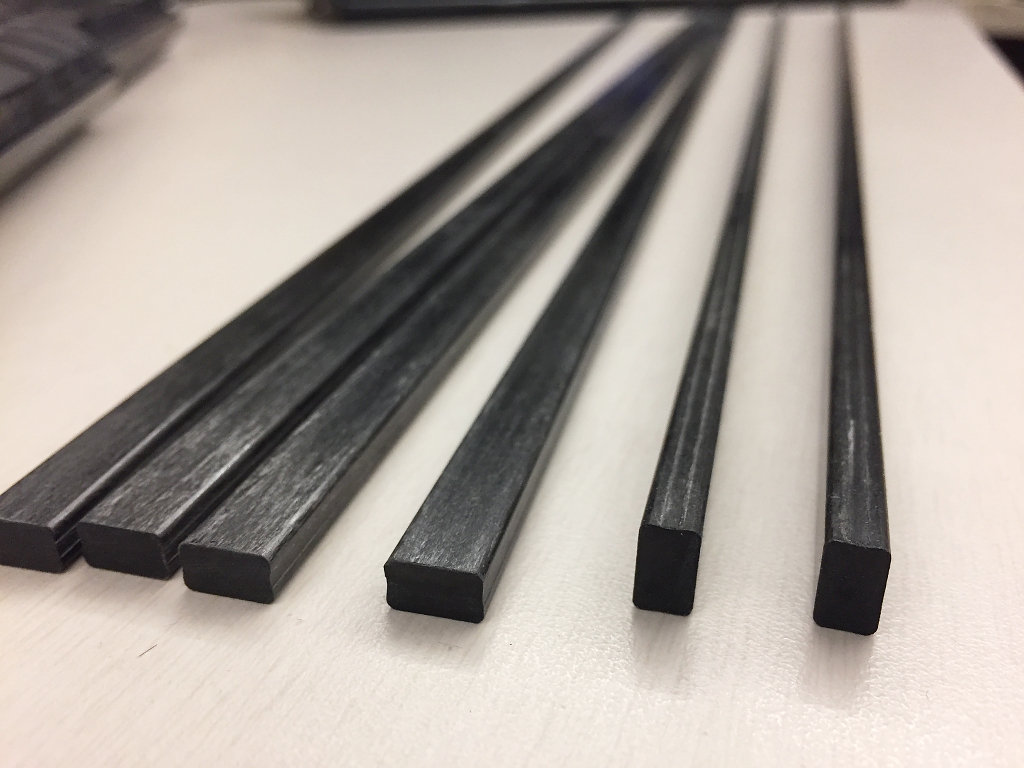 From my friend Paul at Sweetwater. These puppies will make this Strat a force to be reckoned with from the hardest rock and metal, to classic rock, to blues and jazz.

Whatever your musical preference, this axe will do it with style and confidence 🙂 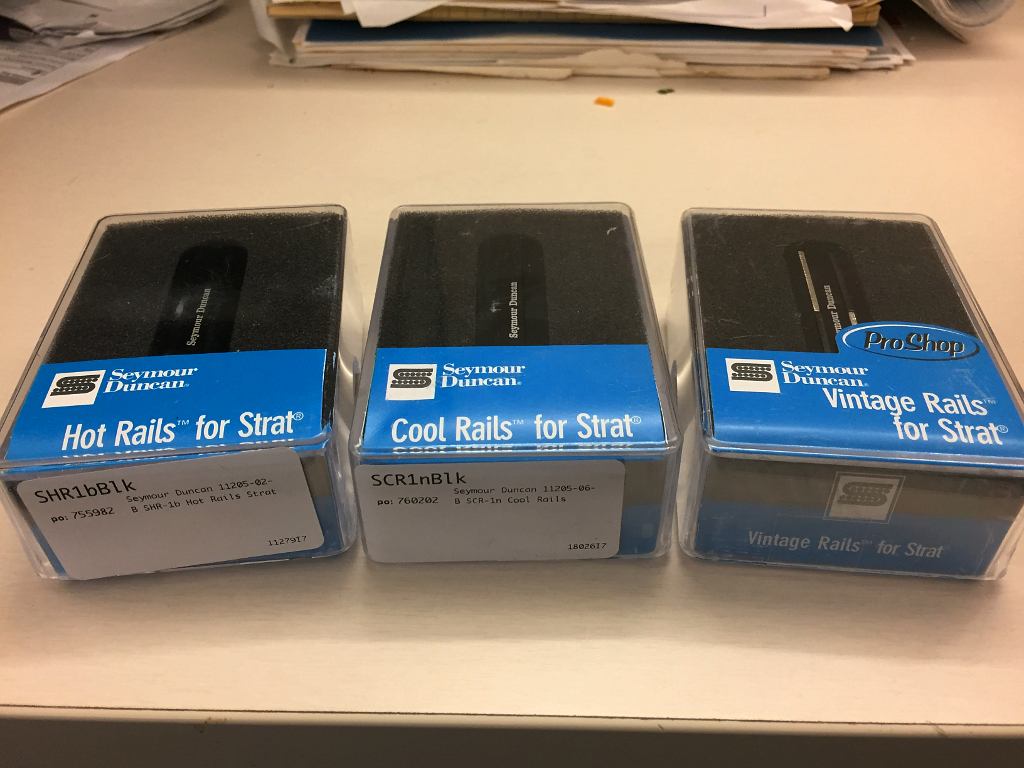 Not to be accused of putting in too much information, here are some write-ups on these pickups:

Seymour Duncan’s Hot Rails pickup is one of the highest output pickups Duncan makes, and also one of the most popular. The Hot Rails uses a pair of blades coupled with strong ceramic magnet and powerful coil windings to create a pickup that’s full and fat with a ton of sustain – perfect for classic rock, but also lending itself very well to more aggressive tones such as garage rock or metal. Best of all, these humbuckers – and all their beefy tone – fits inside a single-coil-sized pickup. Add girth to your tone with the Hot Rails! 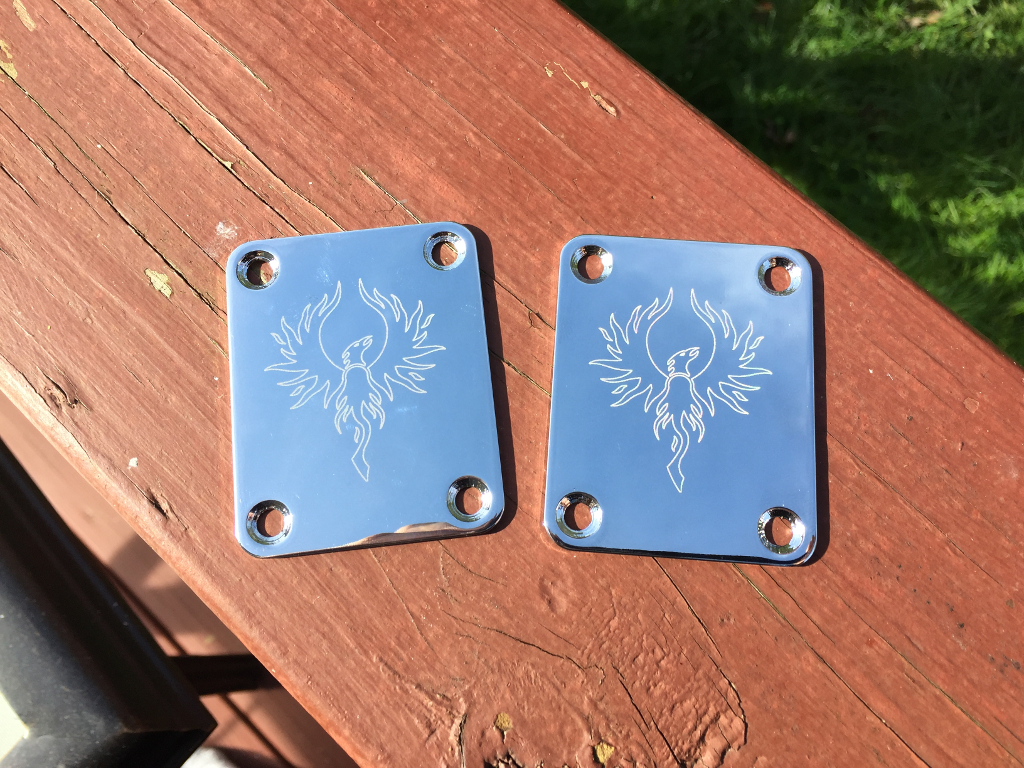 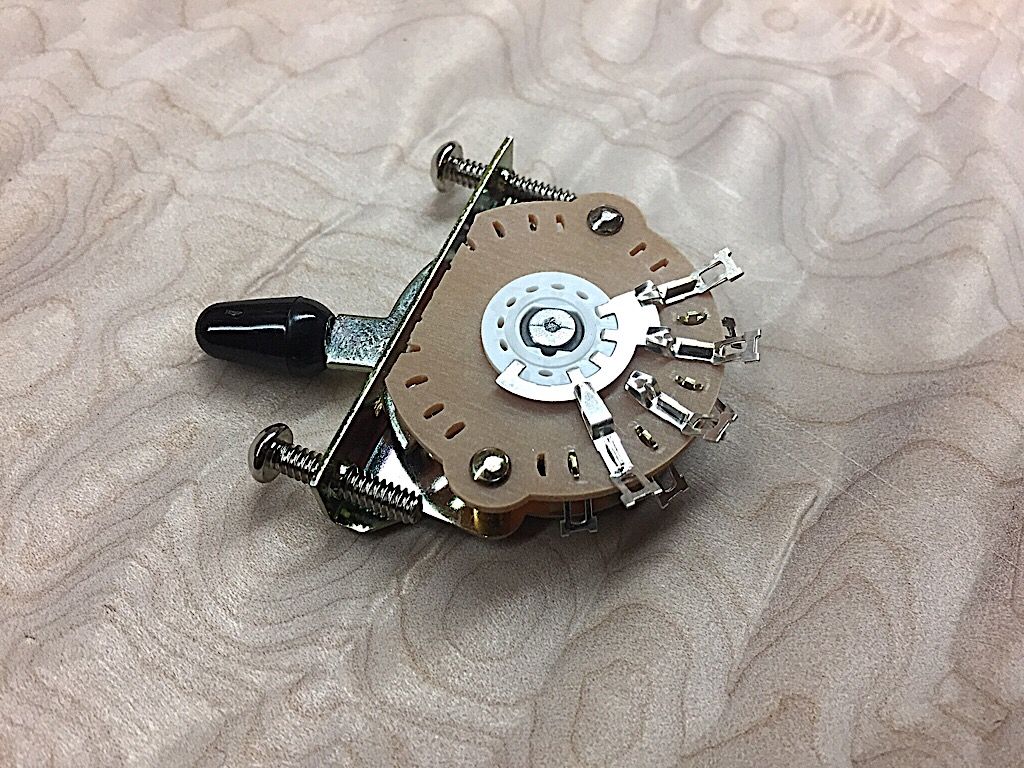 Last but not least, the bird and wave inlays for the fretboard. These are white mother-of-pearl and abalone. They look a dull now but they will be sanded smooth and polished when finished. 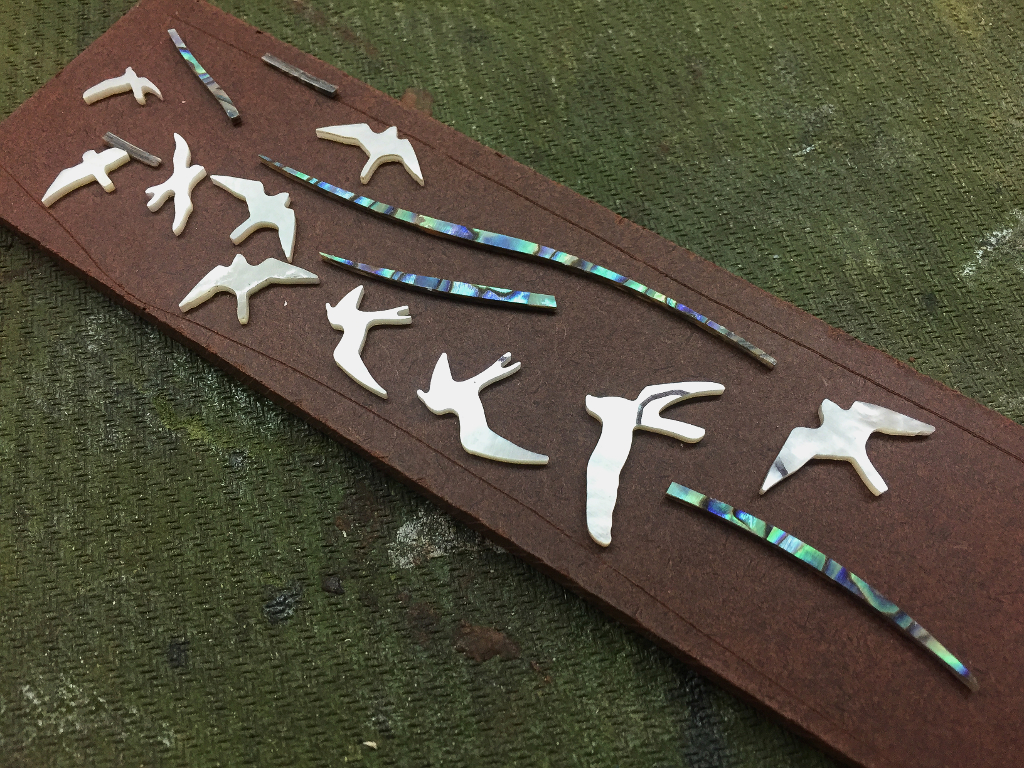