These guitars have been kind of hanging over my head for several years now, and I think 2021 will be the year I re-visit them.

They are both a model I call “22 Special”, and obviously fill that same niche as a LP, sharing many of the same specs, but obviopusly different body and headstock shape. I actually built both of these guitars simultaneously and they both fell victim to the same event which stalled them both indefinitely. The first one got a bit father along and I had actually put hardware on it, but was not really happy with a couple things.

Both are genuine mahogany body and neck, maple cap (one hard, one big leaf) neck-through-body, carbon fiber reinforcement rods, MOP and/or abalone inlays, body and fretboard binding, stainless frets, and 25” scale length. The build thread for both these guitars is in my sig line “Twin 22 Specials”

If you’ve known me for few years you may recognize the first one as the initial recipient of the angel-step quilted top, which is the same billet of wood that I’m using in my current Strat build. In this case its a full thickness carved top.

I tried out a couple things on this build which I decided in retrospect that I didn’t care for at all. Specifically I used a wraparound bridge that I didn’t like both tonally and aesthetically, and also I tried out what I now think was just plain stupid, a couple mini-toggles for different pickup configs (split, parallel, series)

Anyway, the guitar itself is too nice for me to leave it incomplete and despised, so I’m going to plug the toggle holes. They are small enough I think I can hide them pretty well in the pattern. I’m also going to plug the bridge mounting holes, and re-drill for a TOM bridge. I think the new bridge will mostly cover any ugly there. 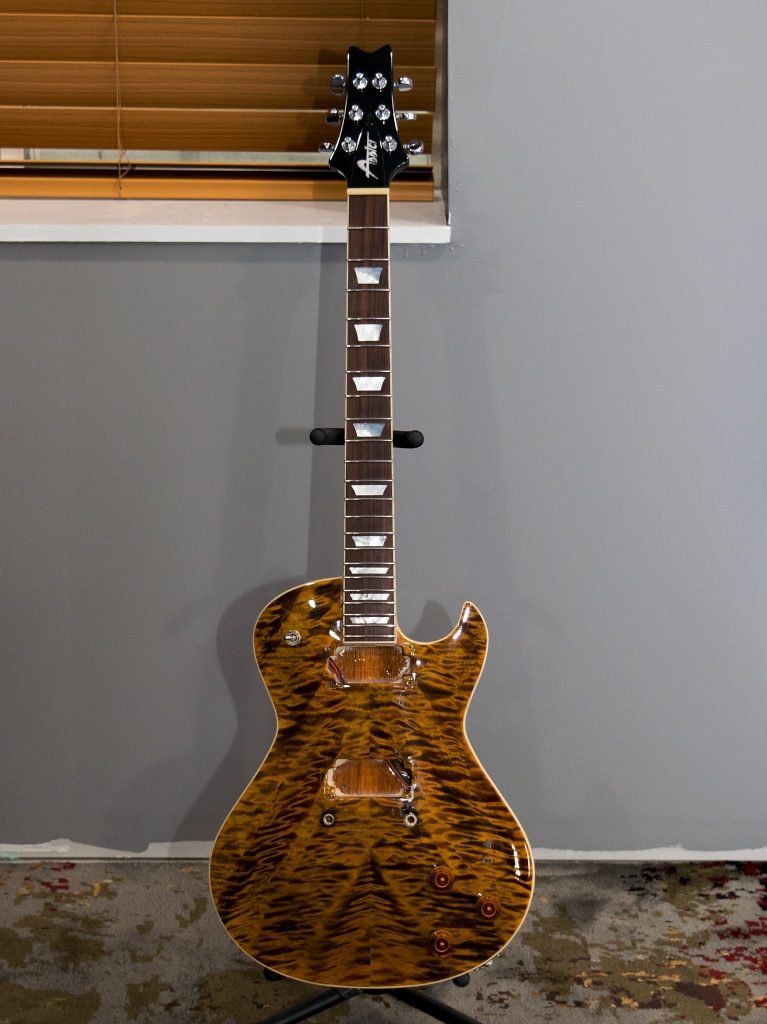 This second guitar is one I built as a gift for my son Chris. I just had sanded and buffed out the finish in February of 2017, and had ordered some hardware to wrap up the build, but he died of a heroin overdose just a few weeks later in March. As if the time of writing this, that was 3 1/2 years ago and its remained exactly as it was since that day. I haven’t had the heart to finish it, and I will certainly never sell it. Its his guitar.

I think 2021 will be the year for me to complete this guitar. Really all it needs is to have the buffing compound cleaned out, frets leveled, crowned, and polished, and the hardware installed.

I’ll never part with it for any price, but I think he would want me to play it for him. I think I’m (almost) ready to do that. 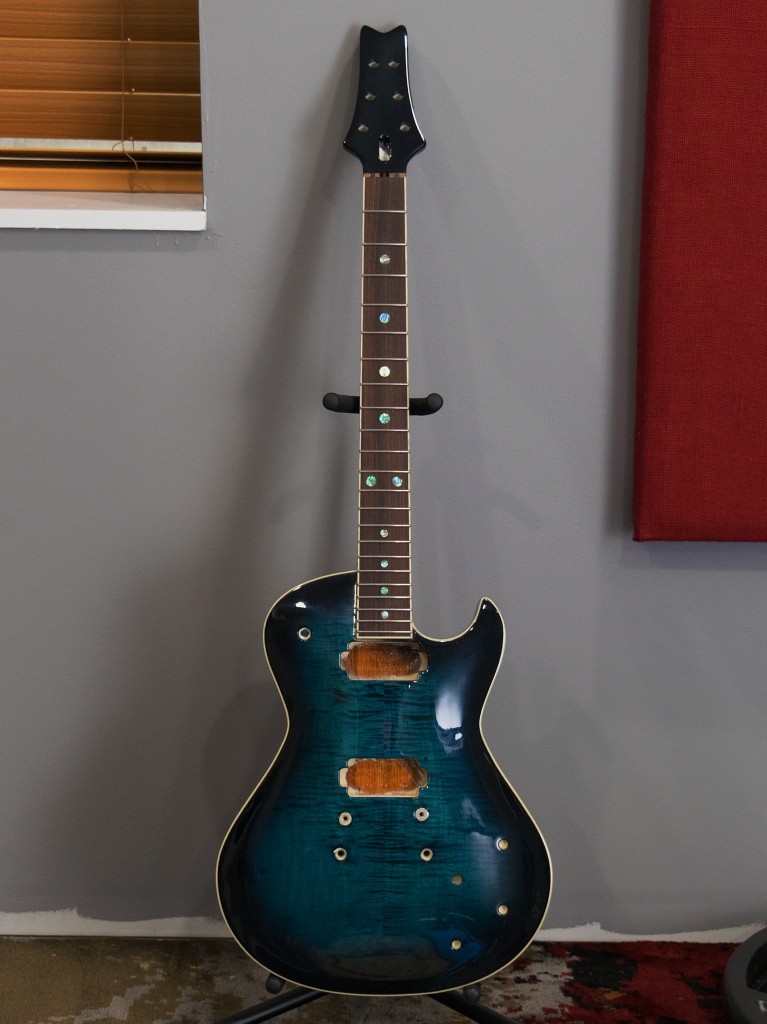 This last guitar is actually my very first attempt to build a guitar. Ever. Sort of.

The first guitar I ever completed was a neck-through Les Paul. The one that started it all 🙂  It wasnt actually the first guitar I ever started to build. That role actually falls to the one shown below. Basically, I built this, and then realized I had made the body just under 3/16″ too thin. I had been shooting a vintage spec LP dimensions, so I set this aside and started over, the result being the Les Paul guitar in my sig. There isnt a damn thing wrong with it, and its pretty much identical to the one that followed, it was just a wee bit too thin. Really by only 1/8″, but too thin is too thin when you are shooting for a very specific number

The top I made for it is nice too. Really straight, tight flame figure, and its hard maple, not big leaf.

I always meant to go back and complete it, but I always have new projects piling up and…well…you know how it is. 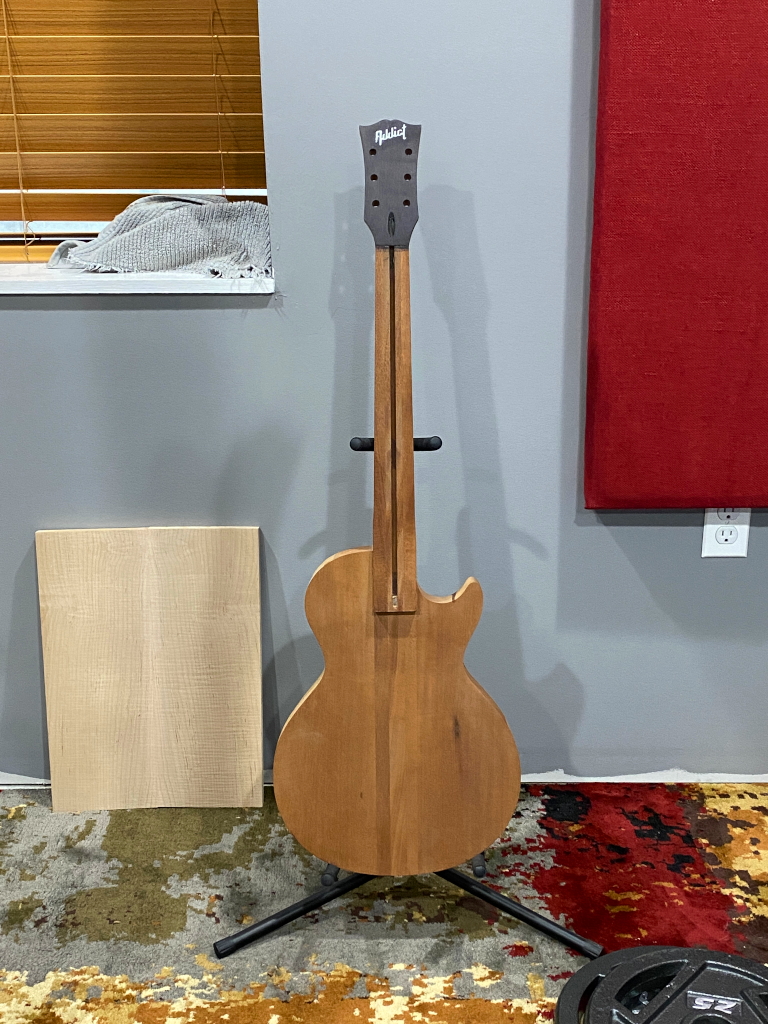