This will be a step-by-step of the process of making an 8″ chef knife with integral bolster and hidden tang. This is a gift for my sister Theresa. 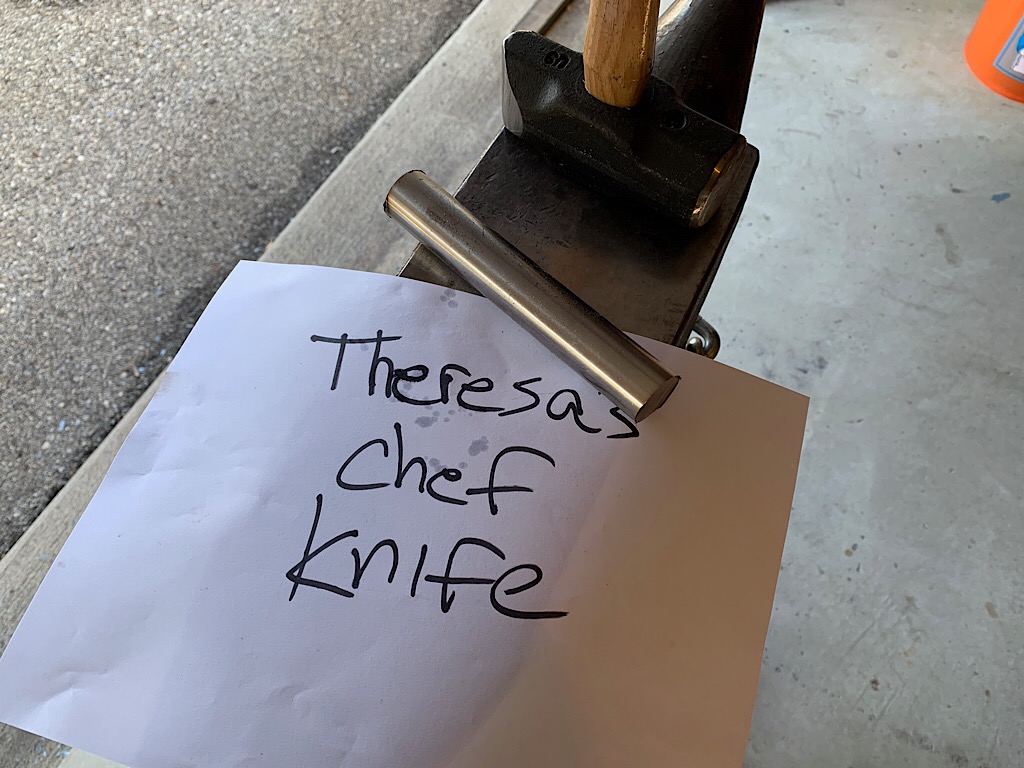 Without further ado, into the forge. Theres two pieces pictured here because originally I planned on making 2 at the same time, but decided to just make one at a time. 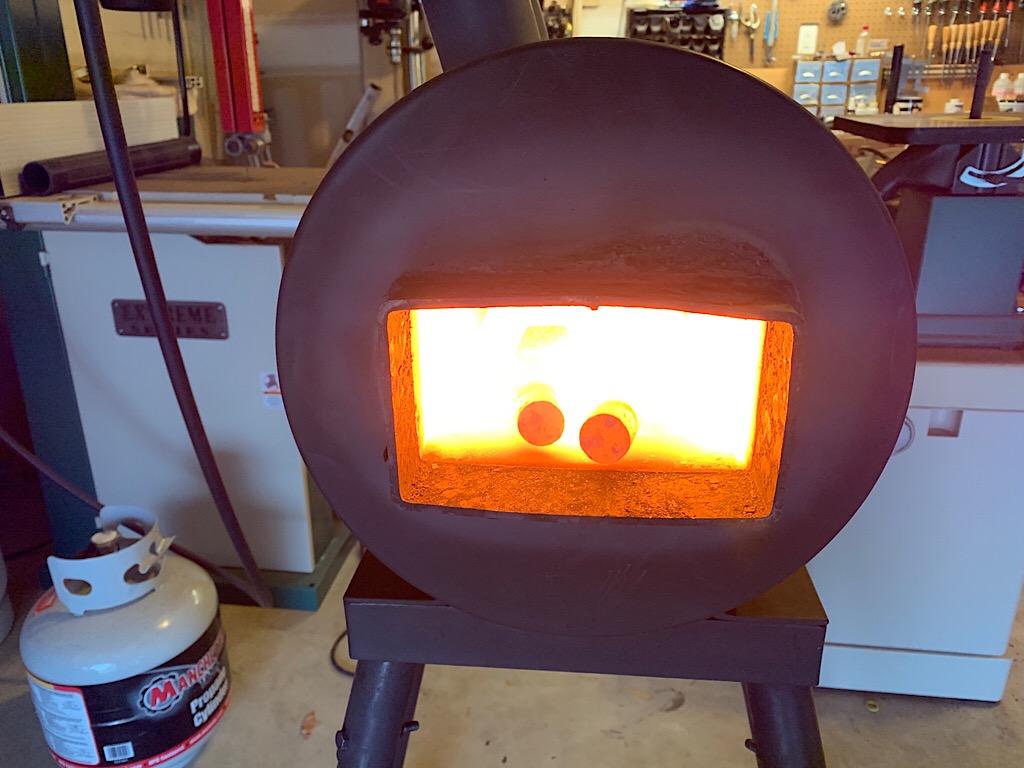 Shown in the next two photos is a guillotine tool. One of the challenges of forming the blade, bolster, and tang all from one solid piece of steel is keeping the blade and tang centered in the bolster, and also aligned rotationally with each other. This tool simplifies that task. Just like the name implies, I put the bar into the guillotine tool and hammer the “blade” down in the groove. There are a couple different dies I use. First one is called a fuller. The fuller dies have a nice smooth radius ground across the top. The other dies are called a butcher. This is shaped more like a cutter with a sharper edge. At 70 degrees angle nobody would accuse it of being sharp, but it is a good deal sharper than the fuller and will make a sharper cut into the bar. You’ll see how each does their job in subsequent shots. 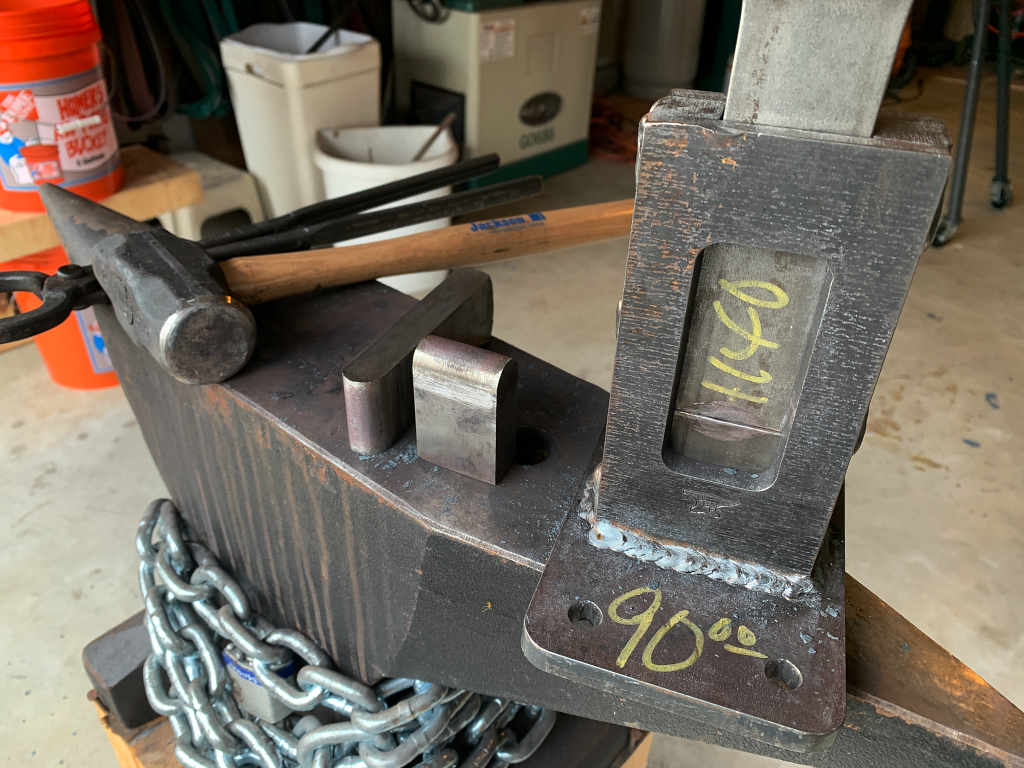 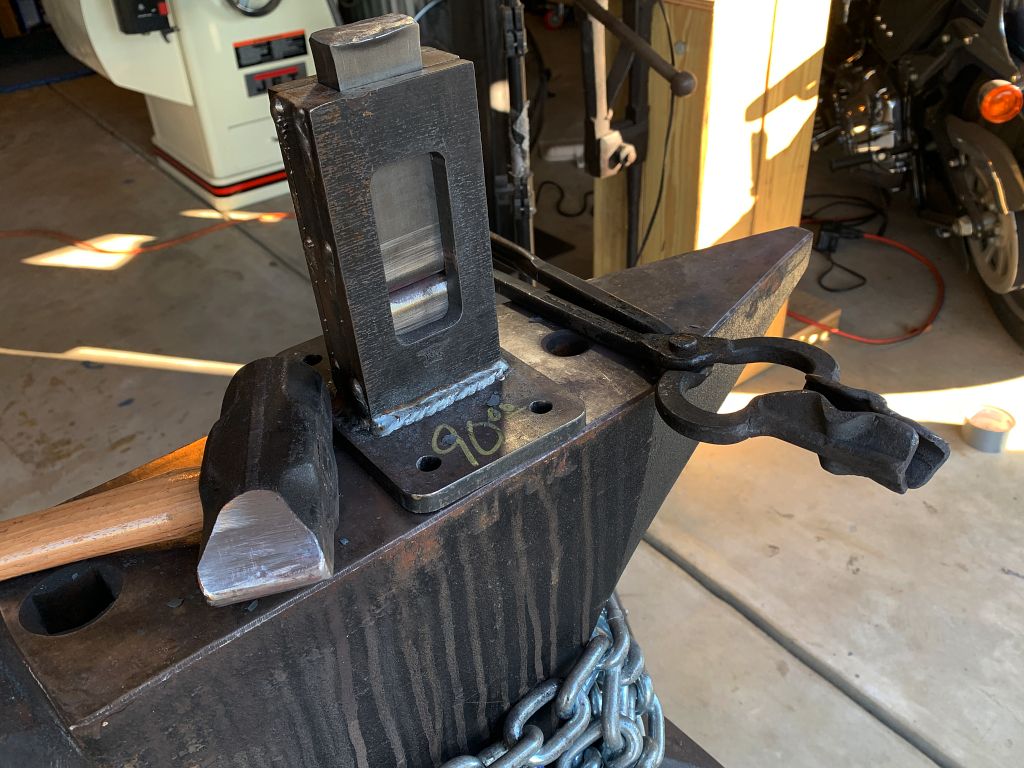 I use the fuller dies to isolate the blade section from the bolster. I prefer the blade to have a smooth radius out to the width of the bolster as opposed to a 90 degree angle 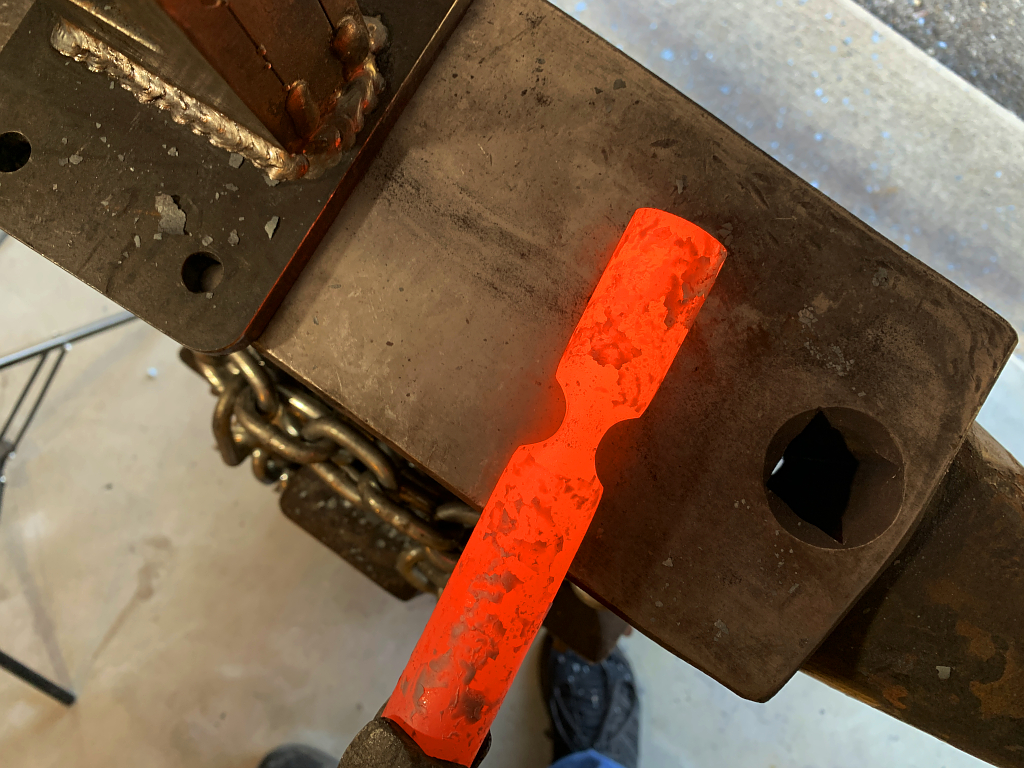 At this point I’ll use these hammers to do the forging. These are a cross-peen and a straight-peen. If I just hammer on the blade with the flat of the hammer it will draw out the blade length-wise because thats essentially the path of least resistance for the steel to move, but thats no good for me since my blade design has the base of the blade nearly 2″ wide, so I need to find a way to force the steel to spread out sideways rather than long-ways. The peen sides of the hammers allow me to force the steel to go the way I want it to go.

I use the cross-peen to hammer out the width. the steel does not want to cooperate, so this part takes some time and effort. I have to coax the steel not only out width-wise, but also back towards the handle because I need that blade to be at its full width right at the base, but I cant touch the bolster. 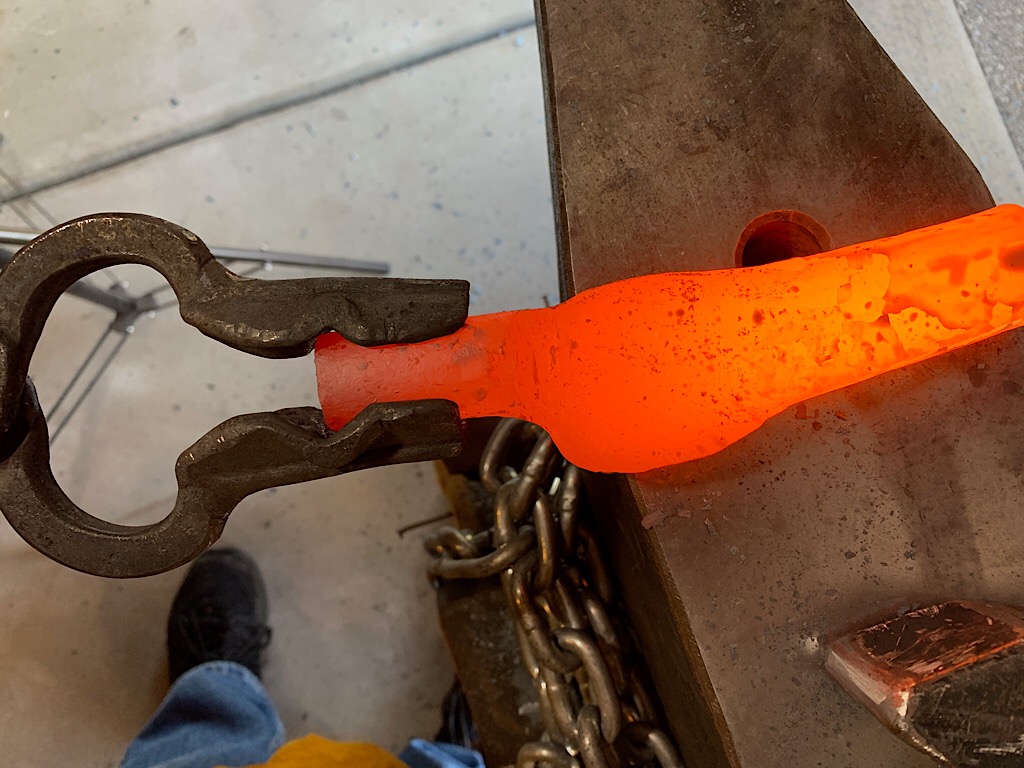 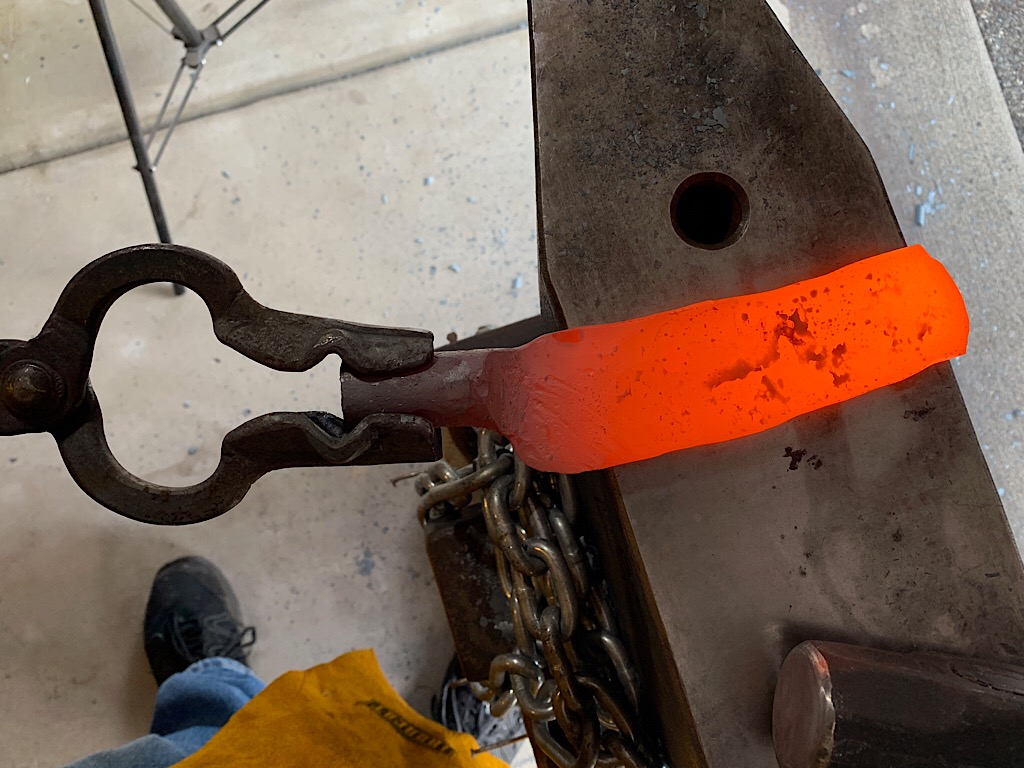 and forming the tapers down to the point. 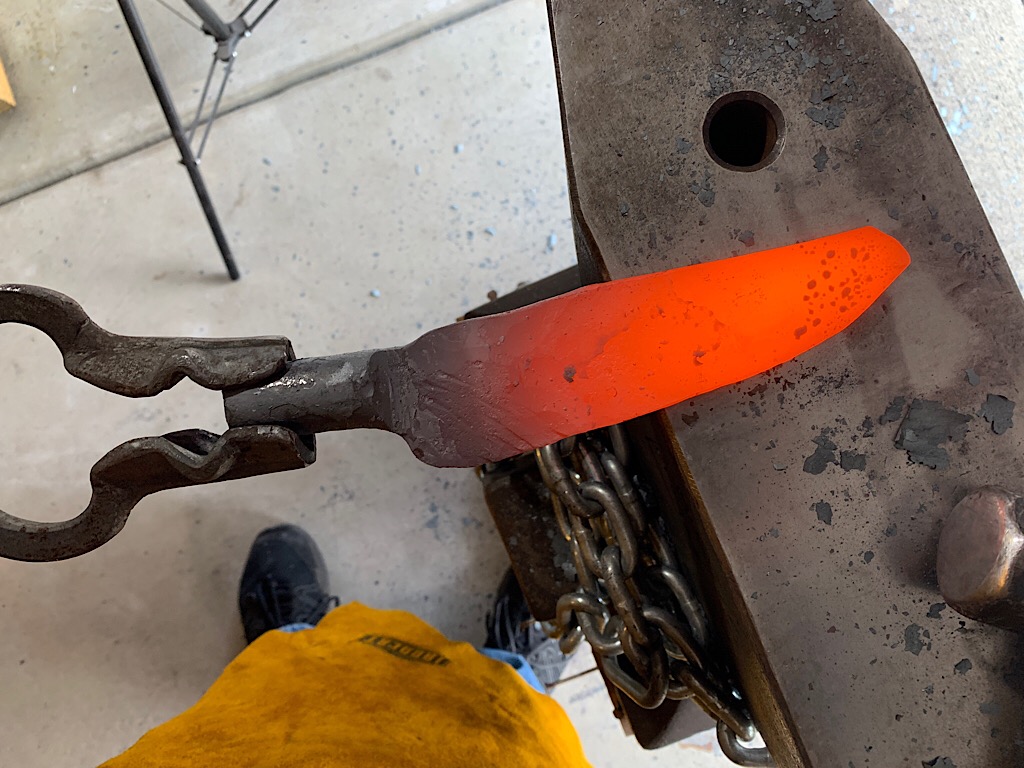 Narrow though they are, a knife blade is a 3D object. In addition to the length, width, and taper, the blade will also be thicker at the spine and become more narrow in a smooth, flat plane down to the edge like a very narrow wedge if viewed in a cross-section. This wedge shape is called the primary bevel and is forged into the shape at the same time as the other dimensions. It will also have whats called “distal” taper. This means that at the spine the blade is thicker at the bolster and tapers smoothly and gradually toward the tip.

This was very challenging for me at first. Even at 1800 F, the steel is so stiff that it takes heavy hammer blows to make it move and then it only moves a very little bit with each blow, and you only get about 60 seconds of working time with each heat because the steel cools off very quickly. The anvil is a giant heat sink that pulls the heat right out of the blade. To frame that in real time, the forging part of this knife build was about 3 1/2 hours of heat, hammer, heat, hammer, heat, hammer, etc. I hope in time to reduce that as my skills grow 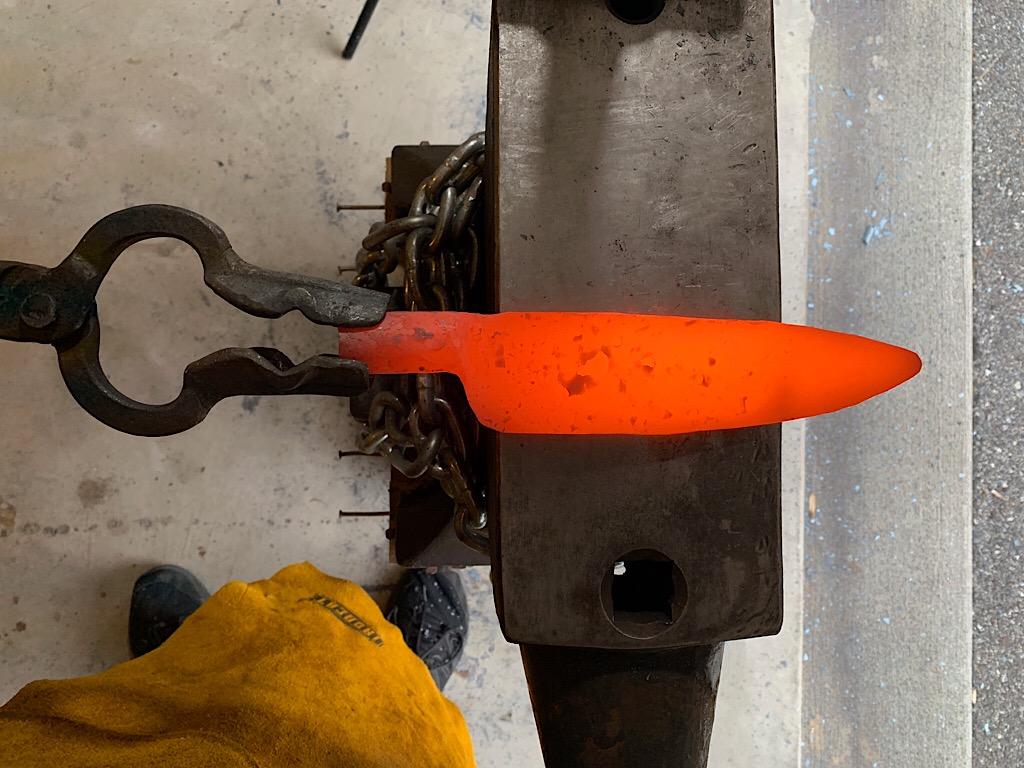 So here you can see what the butcher dies in the guillotine tool do. I used that to isolate the tang steel from the bolster. See how cleanly is isolates as opposed to the smooth radius of the fuller. Now I just draw that “knob” on the end out to about 4.5″  in length and that will be the tang. the tang extends almost to the end of the handle inside to give the blade strength. If you just tried to glue the blade to the handle with no tang it would break off eventually. 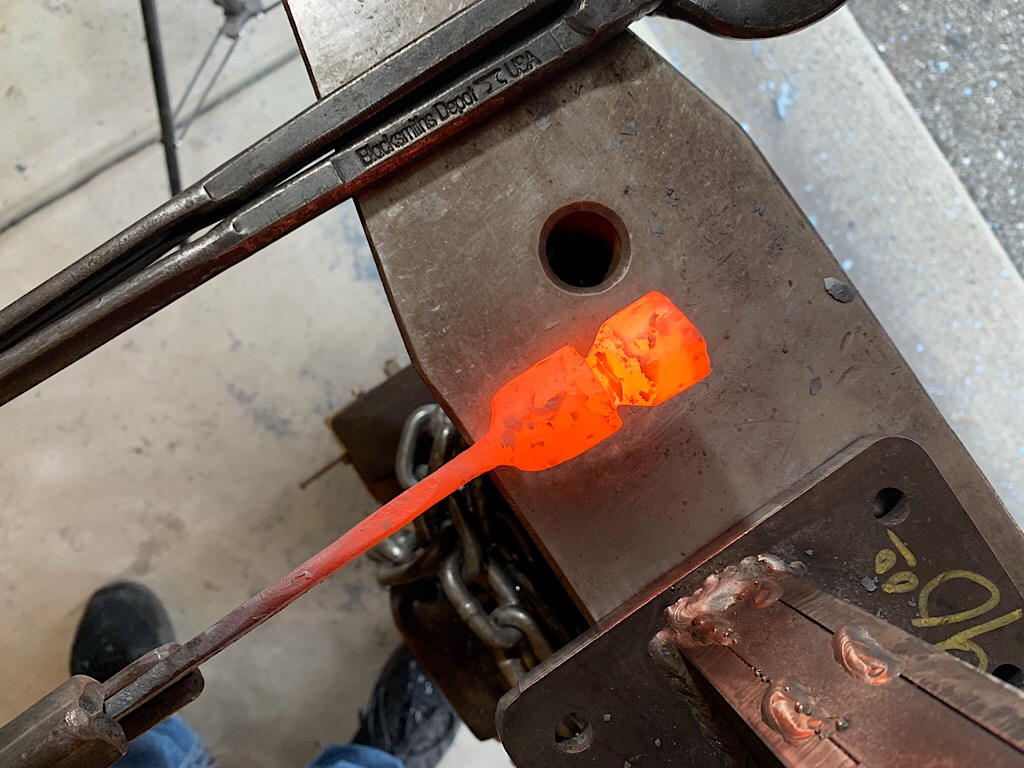 Fully forged. Recall in the forge shot there were two pieces of steel in there, but I only ended up forging out one of them. Here it is next to the forged knife. Sort of a before/after look. 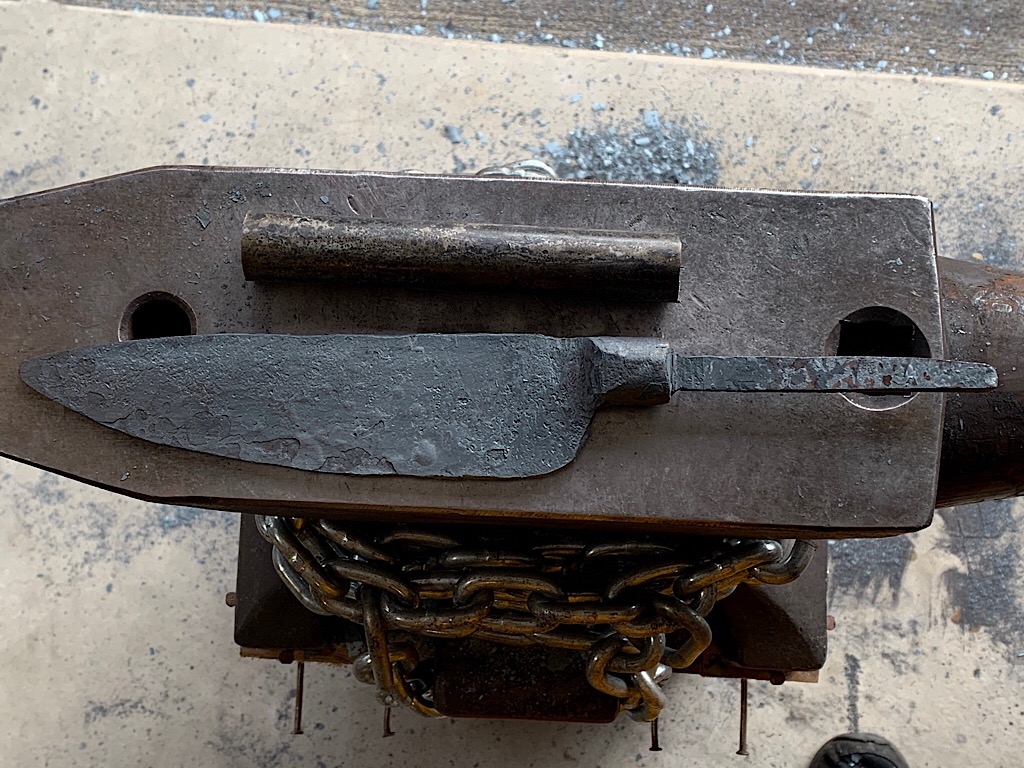 Here it is with the profile lines roughly ground in (mostly), and the forge scale ground off the blade, bolster, and tang. This is not a final finish. More grinding to come 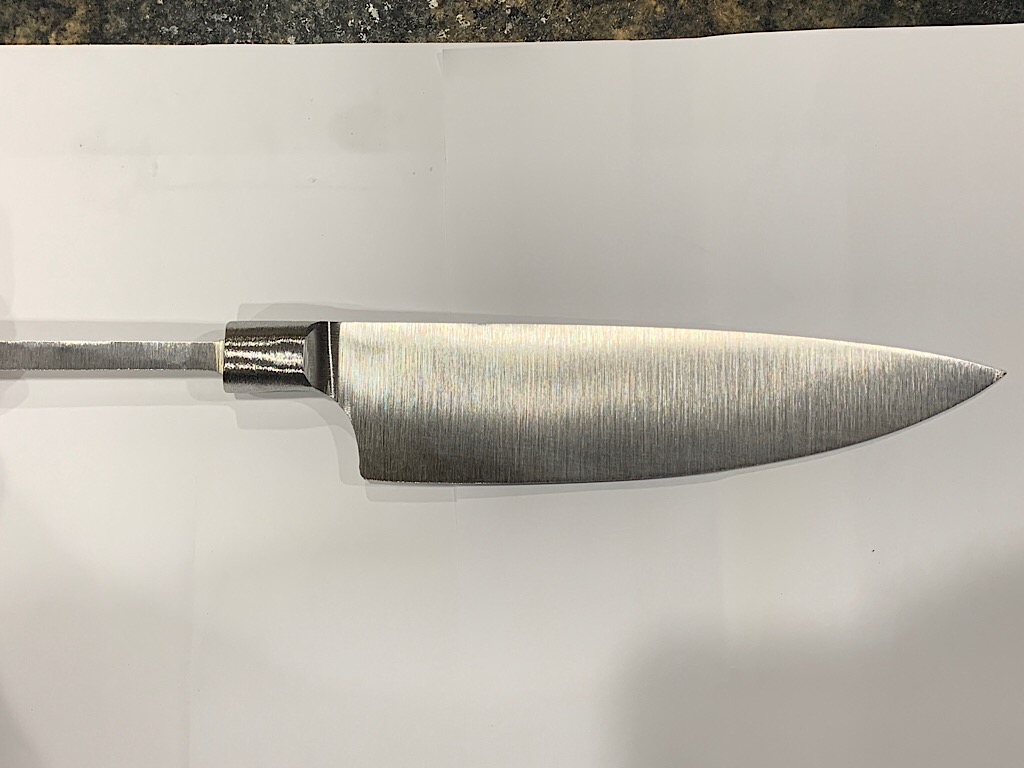 Some shaping of the bolster, and everything sanded to 120 grit. ready for heat treating 🙂 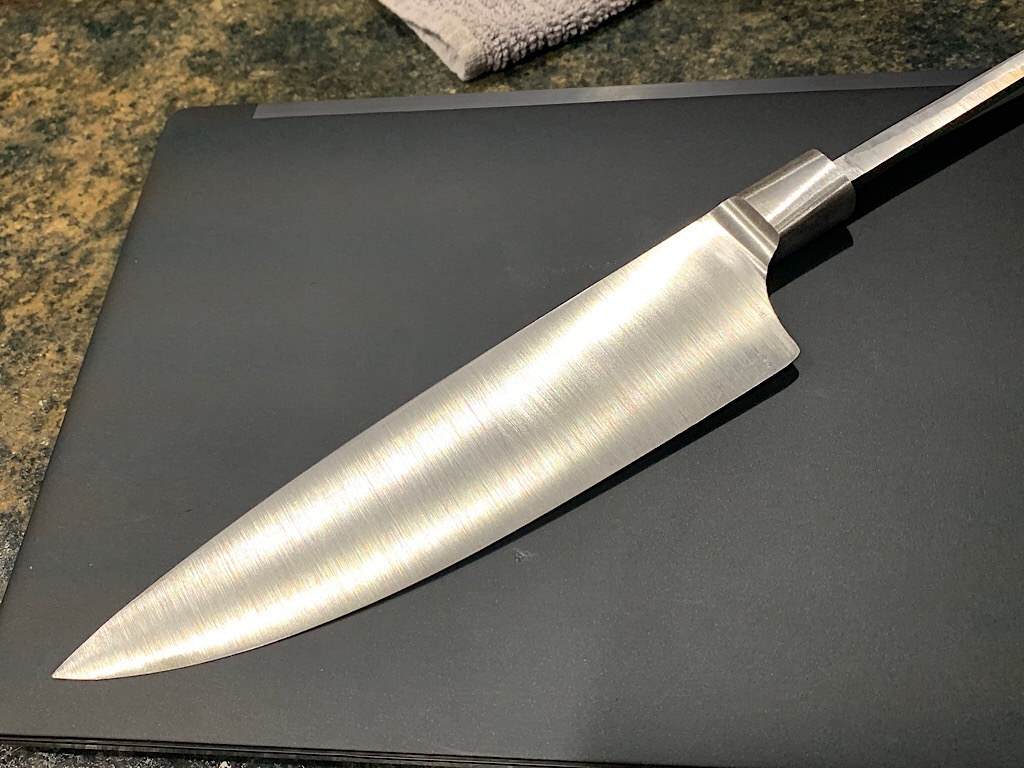 Woo-hooo! Fucked it all up!

In an effort to avoid having to sane too much after heat treatment I ground the edge too thin, and it warped during heat treatment. Some warps are fixable, but this one was too severe.

So, back to the drawing board. Forged out a new blade… 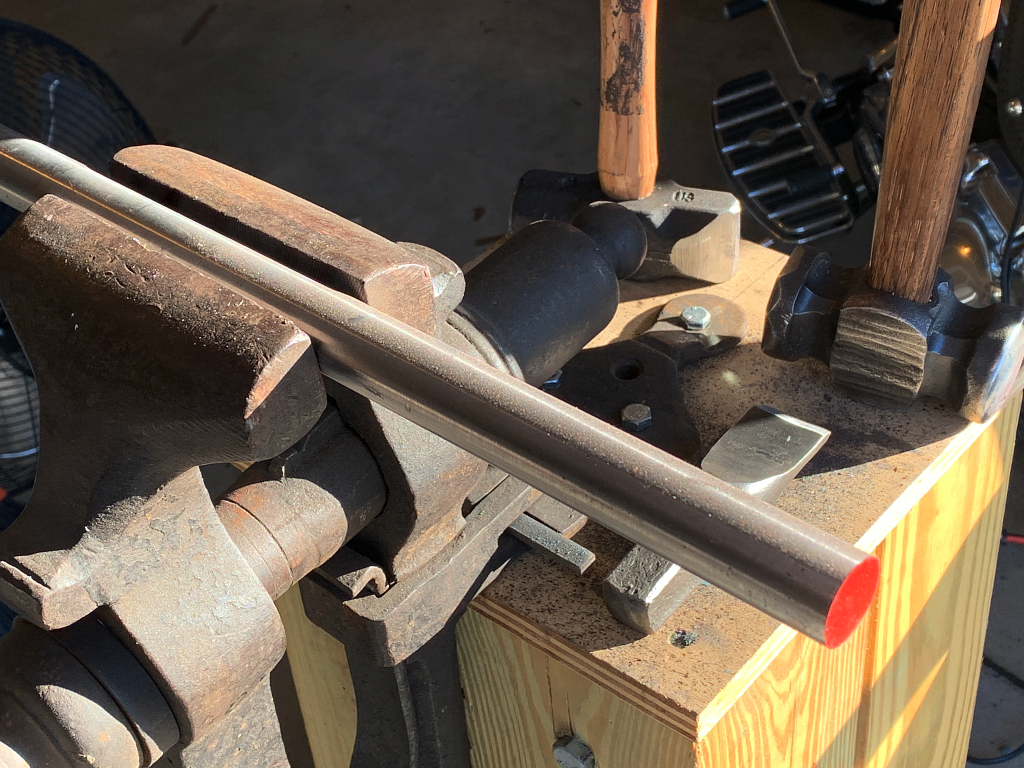 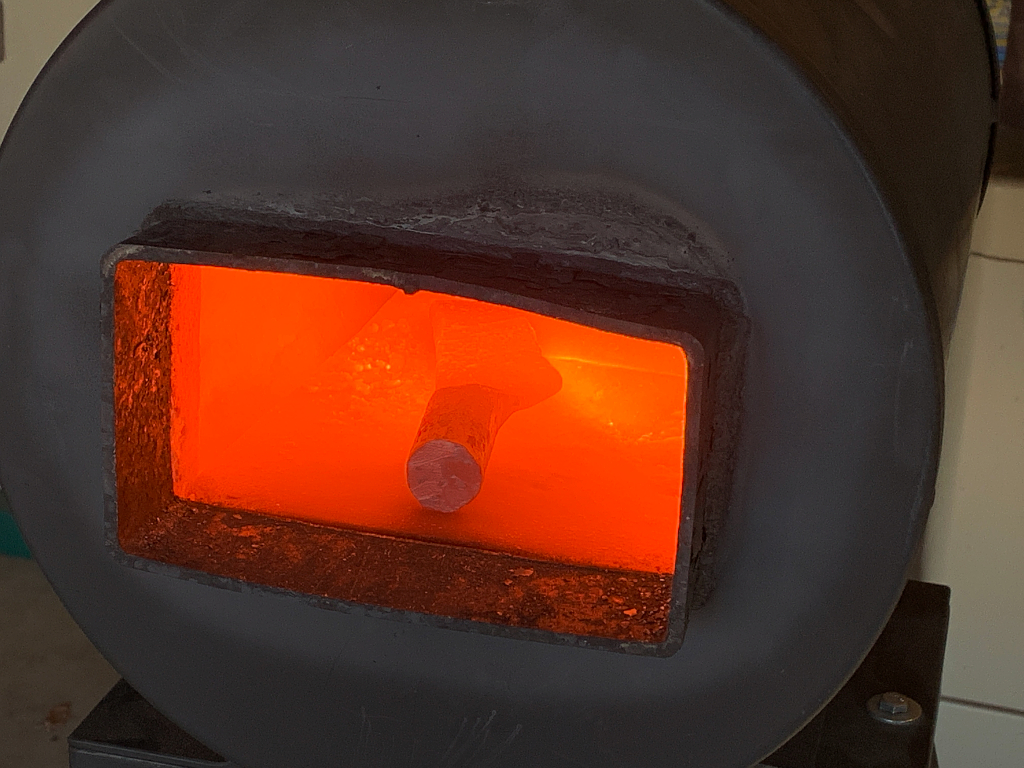 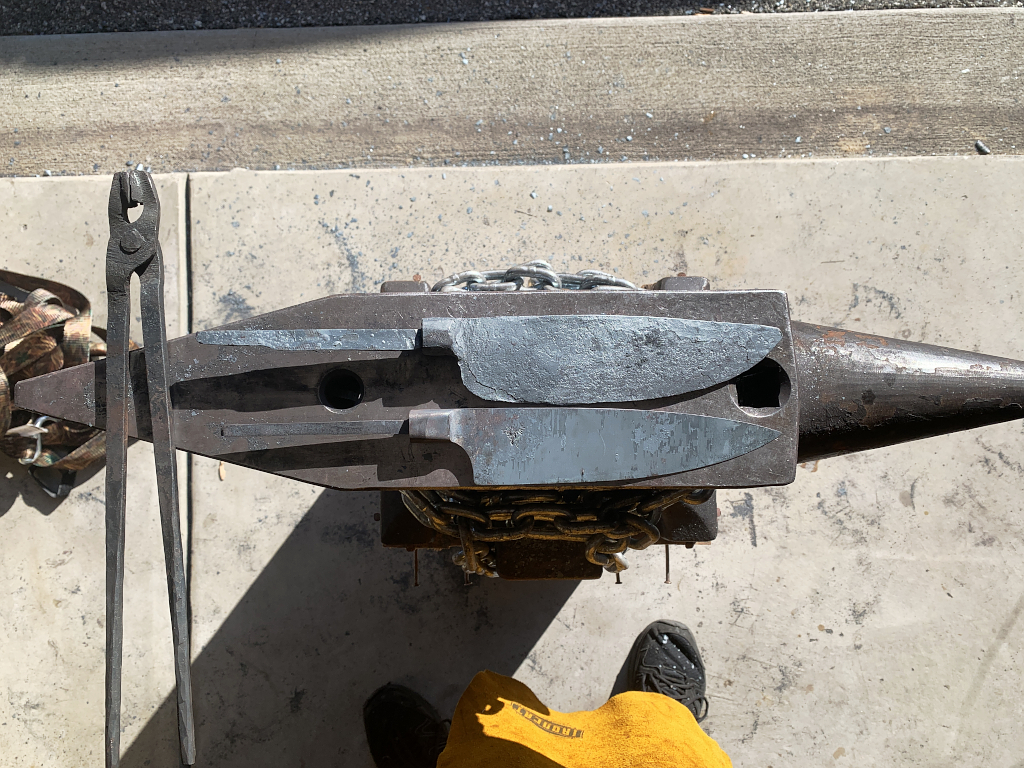 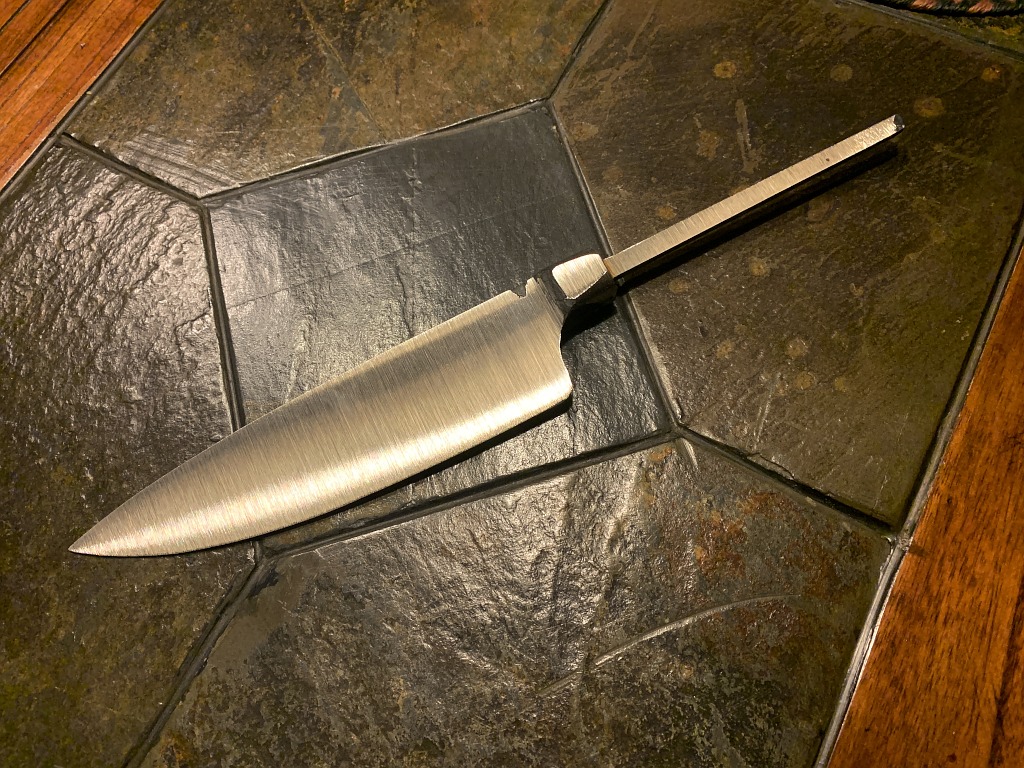 In learning any craft we learn more from our mistakes than our successes, and I’ve been learning a LOT lately 😉