Trying to make a big kitchen knife, but not a delicate flower. This is a 10” blade, and pretty thick as chef knives go. Built for heavier work.

I will also attempt to differentially harden this knife using the clay method, and hope to have a prominent hamon. 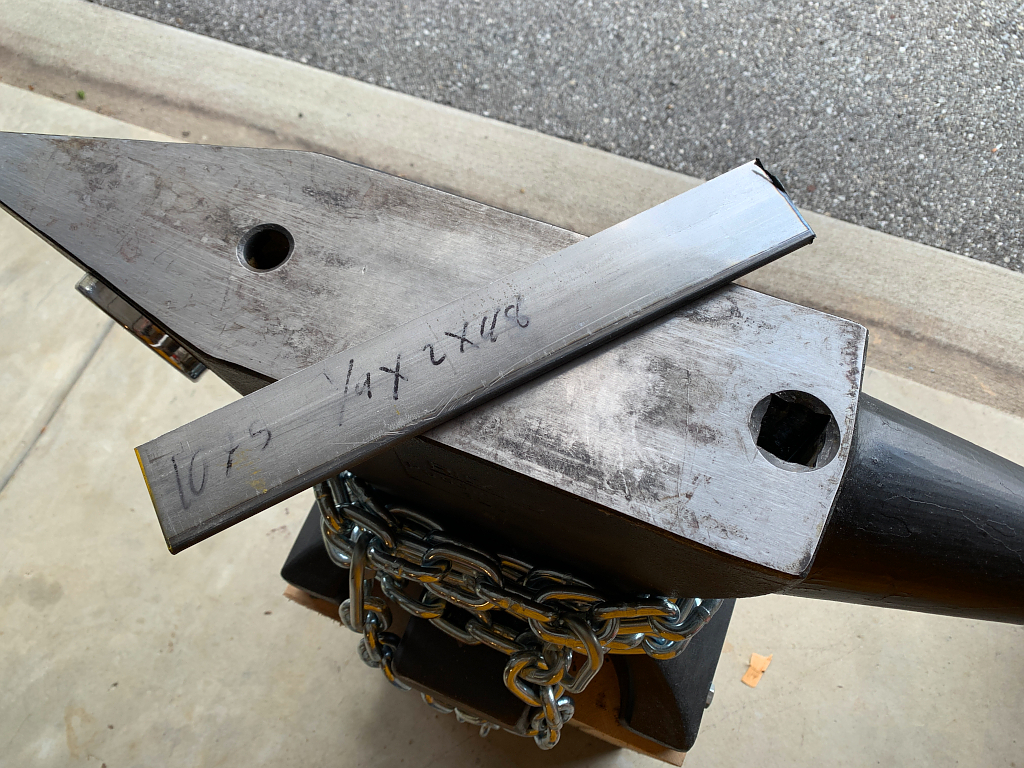 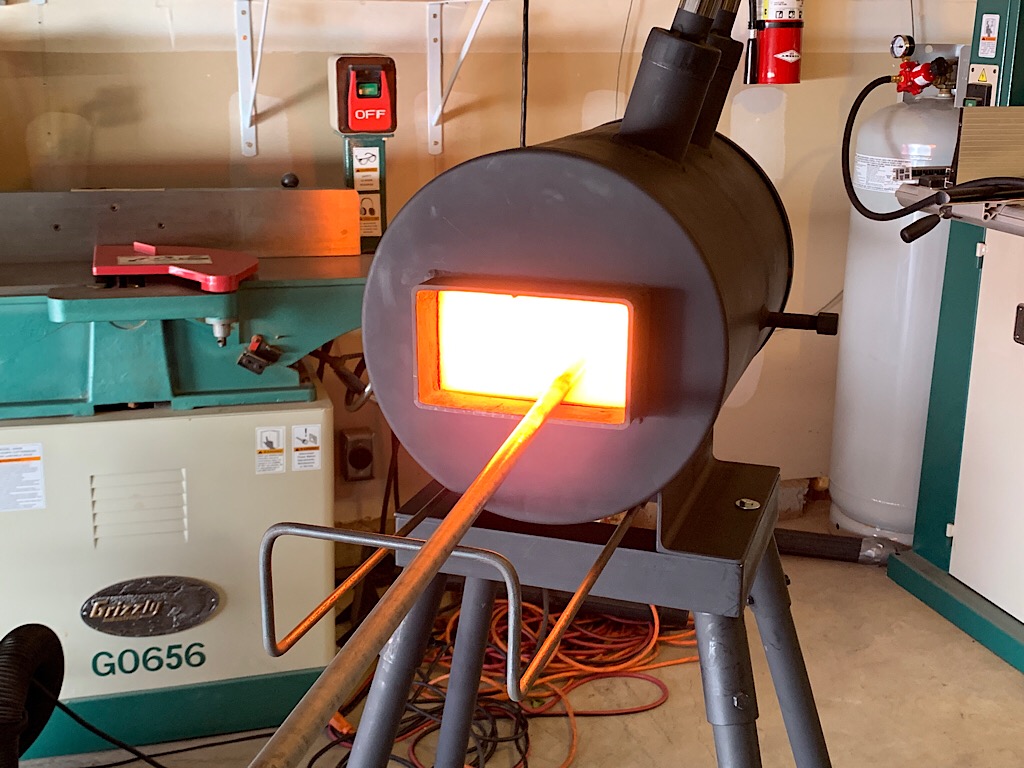 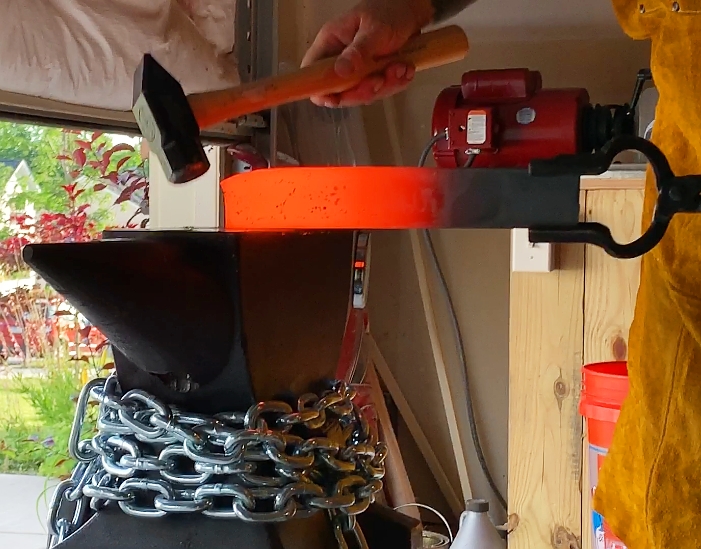 The rough shape, including overall dimensions, tang, and bevels, is forged. This took roughly 2 hours. I expect to reduce this time as my skill improves. 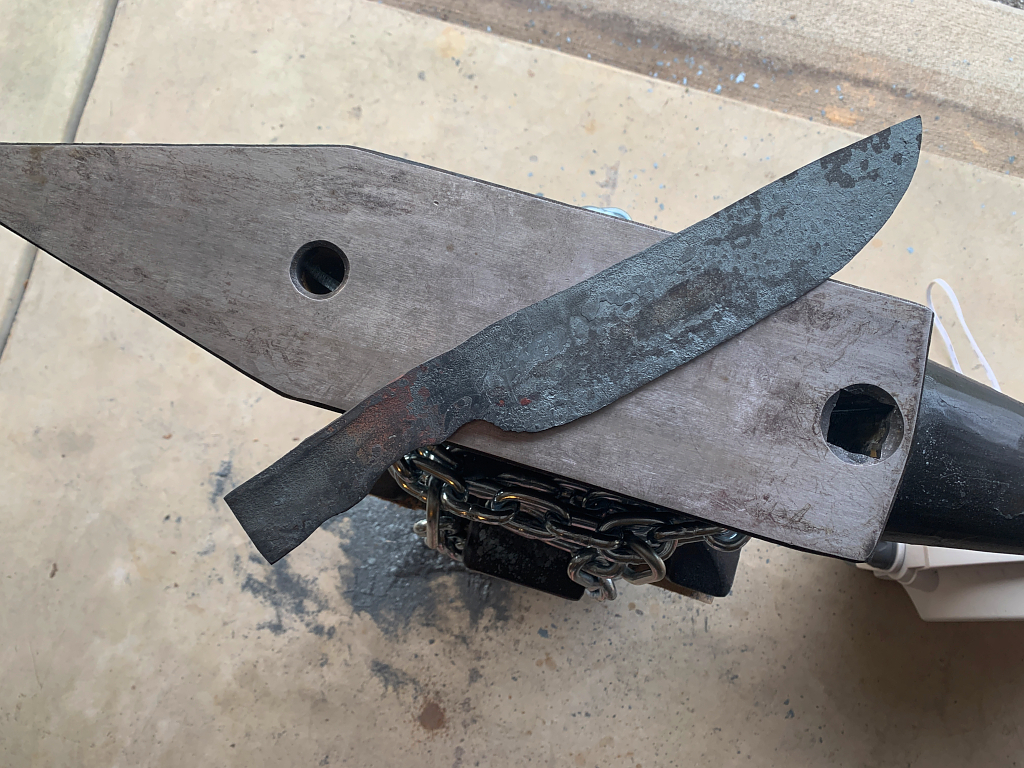 Rough profile is created on the grinder 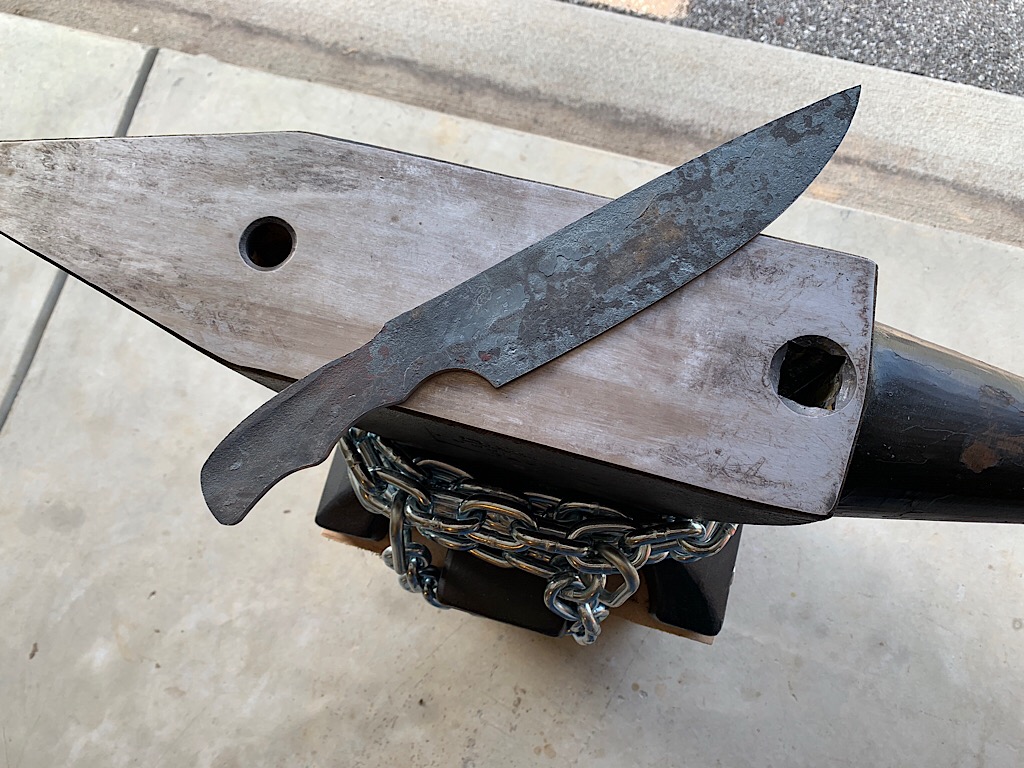 Forge scale is ground off… 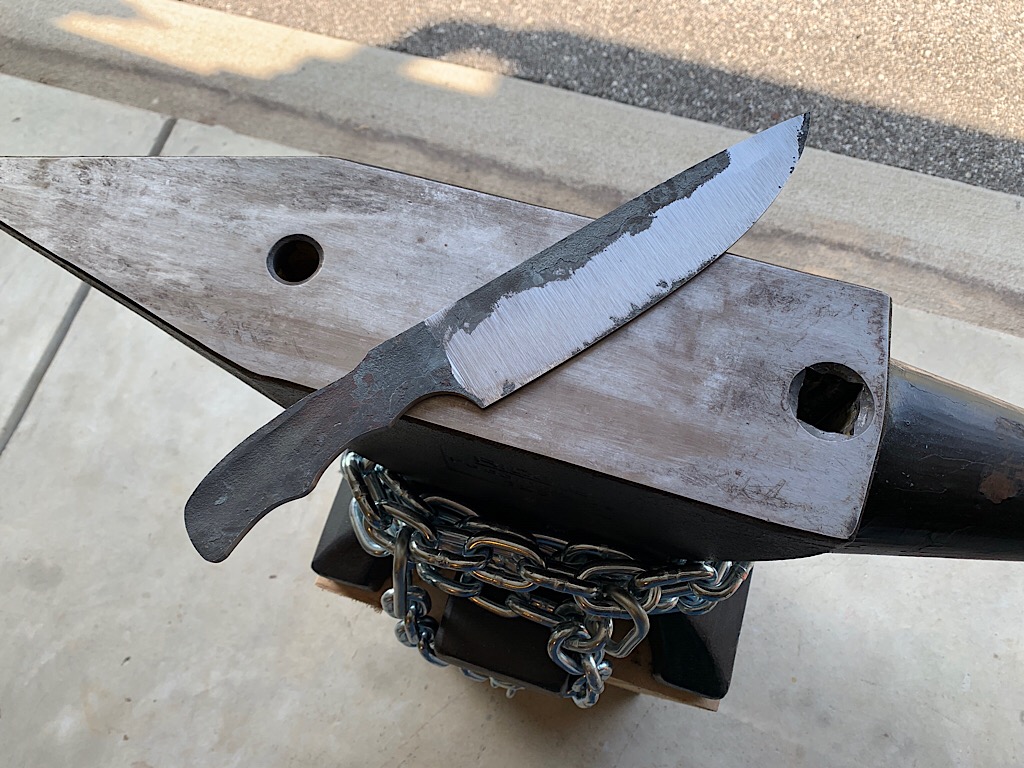 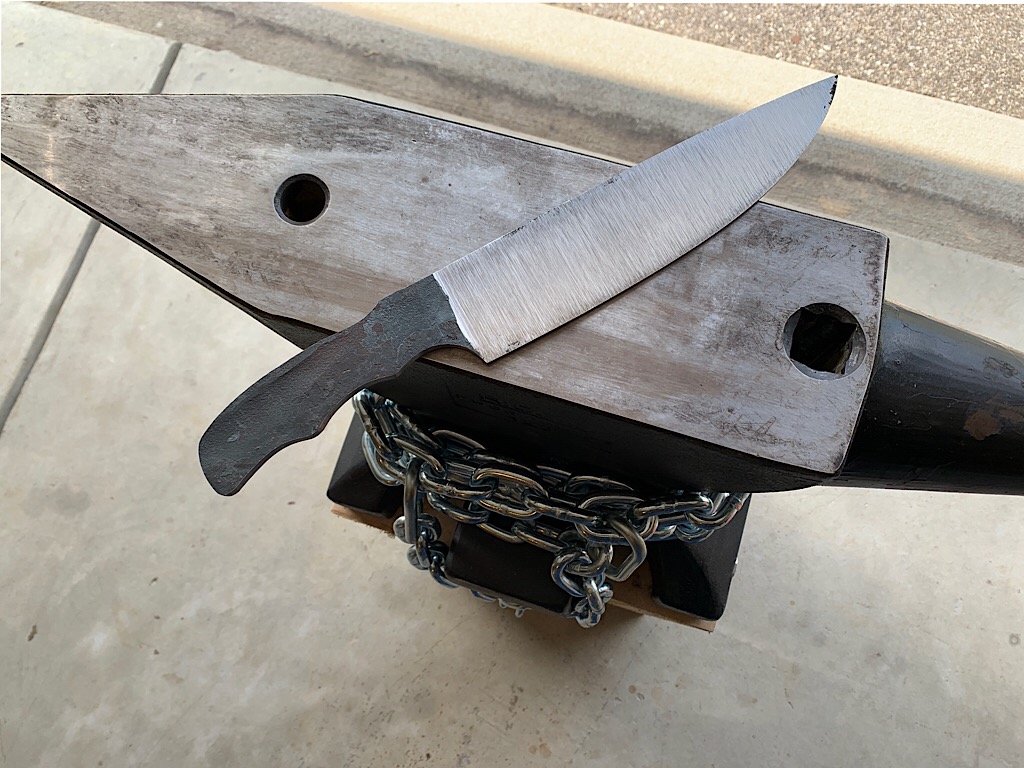 sanding up to 120 grit will be done prior to heat treatment, I’m at 80 grit in this photo… 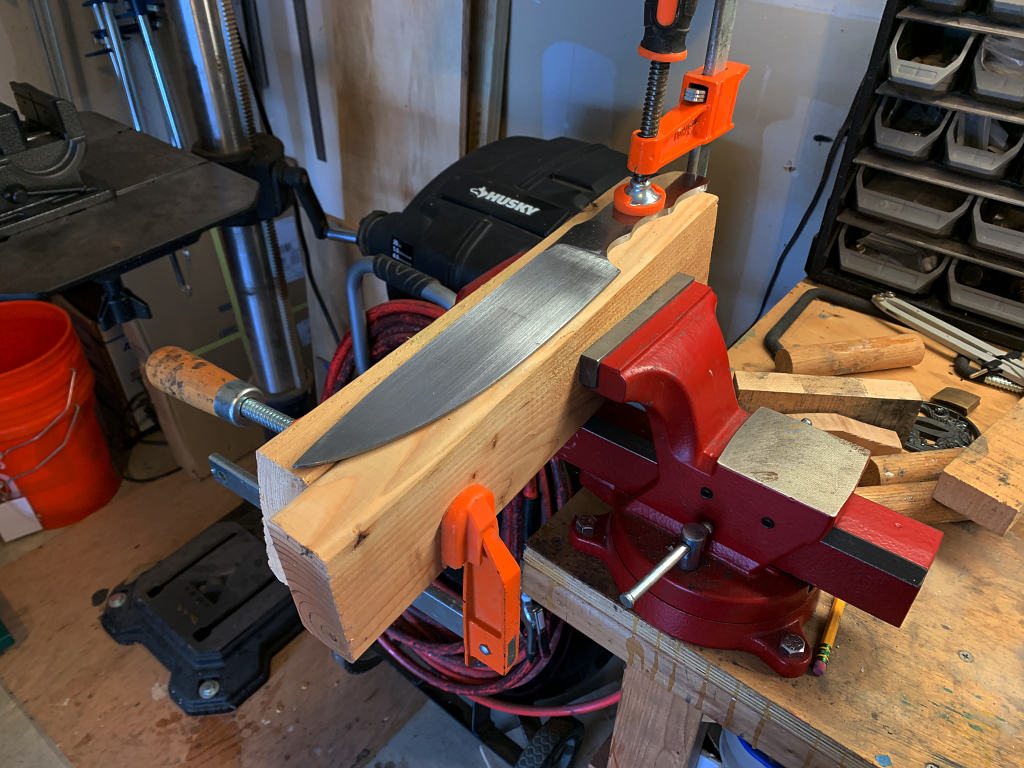 Here we go with the heat treatment. Unfortunately I didnt take a photo of the blade after applying the clay, but if you paude the video just before I quench if, you can see that the blade is coated with the refractory clay except for the edge.

Warning: This is my technical explanation of this process, and may bore the shit out of most of you!

Most of the blade is coated with a refractory clay while the edge is left bare metal. Then the blade is heated to the critical eutectoid temperature (in the case of 1095 steel, this is exactly 1475 F.) and held at that temp for 15 minutes to get the entire blade heated evenly and all the carbon in the steel into solution.

The blade is removed from the kiln and then immediately quenched in 120 F. water for 4 seconds, then interrupted for a couple seconds, then finished in parks 50 quench oil.

When its cooled this quickly, (1475 to 800 in less than 0.7 sec) the carbon doesnt have time to migrate back out of the austenite before it solidifies, and the austenite transforms into martensite. Martensite is extremely hard, but when sharpened it can be honed to an extremely fine edge and will retain that edge for a long time.

The rest of the blade, which is coated with refractory clay cools more slowly. It still cools fast, but not fast enough the martensitic transformation to take place. Cooling at this rate it forms a different crystalline structure called pearlite. This is not as hard or brittle as the edge and will withstand a lot more punishment, and will deform before it cracks or breaks.

The overall effect of the differential heat treatment is a very tough blade that can take a lot of abuse without breaking, but will also have a super hard edge that can be easily sharpened to a razor edge and wont deform under stress and will retain that edge for a long time without re-sharpening

Once ground and polished there will be a visible line on the blade in the area of demarcation between the martensite and the pearlite. This is called a hamon. This is a common feature seen on japanese swords, since this is the exact process they used to heat treat their swords.

Here is the blade again after rough grinding to 120 grit to remove the scale and decarb from the heat treatment, You can now see the hamon, which is the wavy line running roughly parallel to the edge. 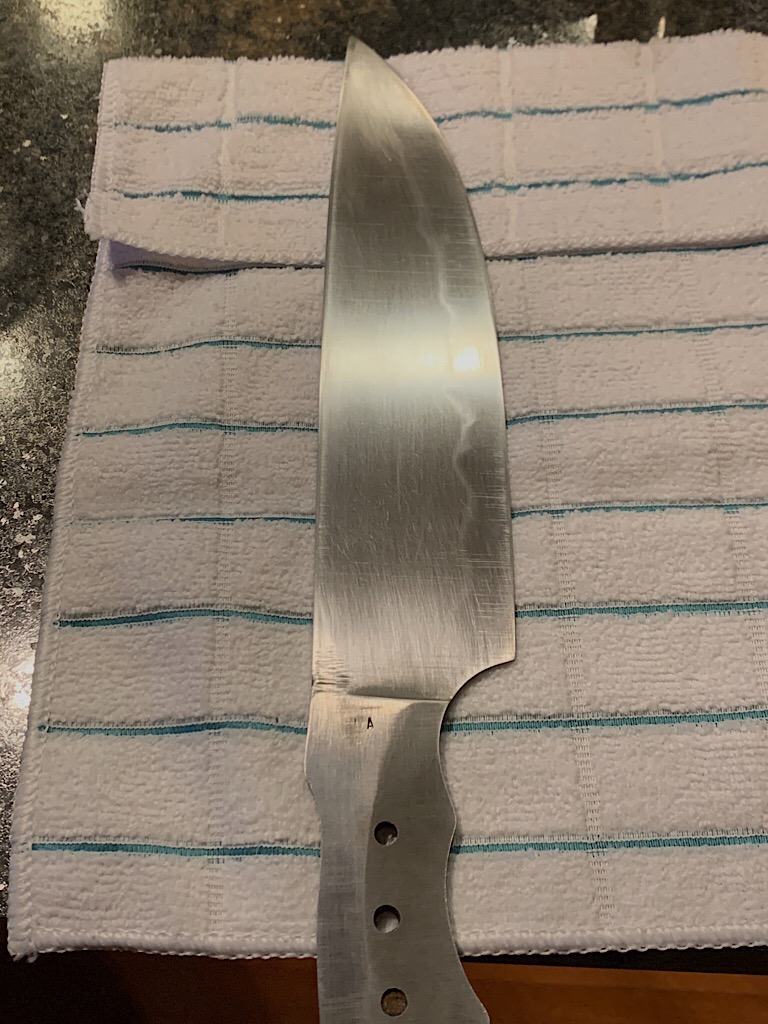 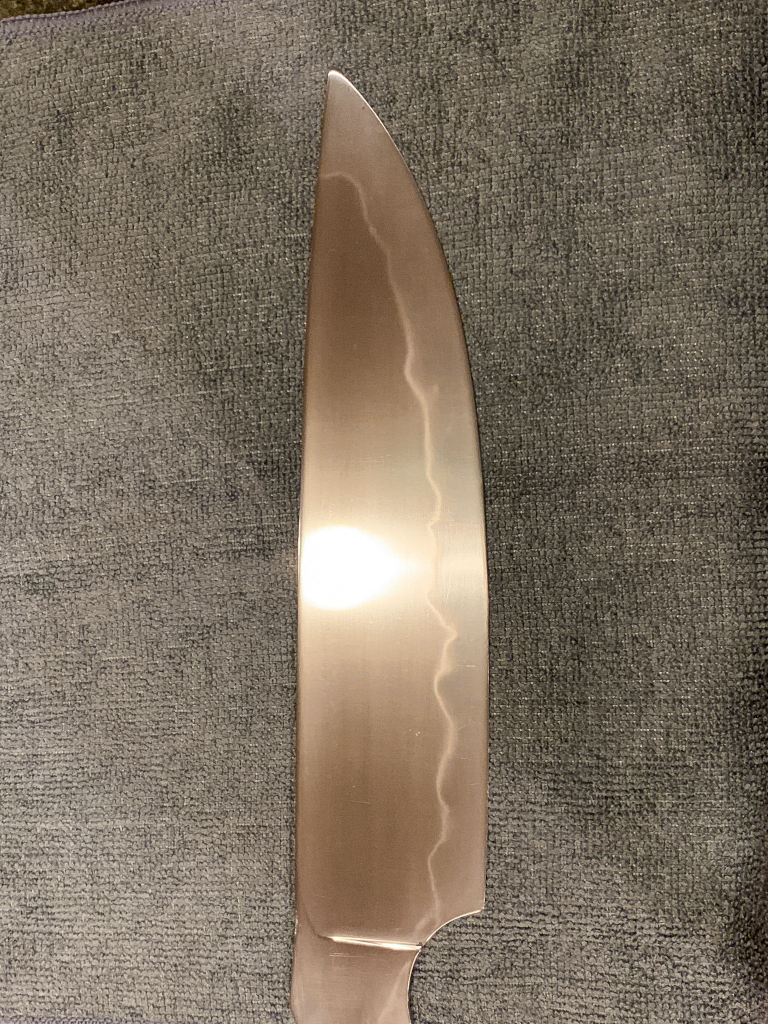 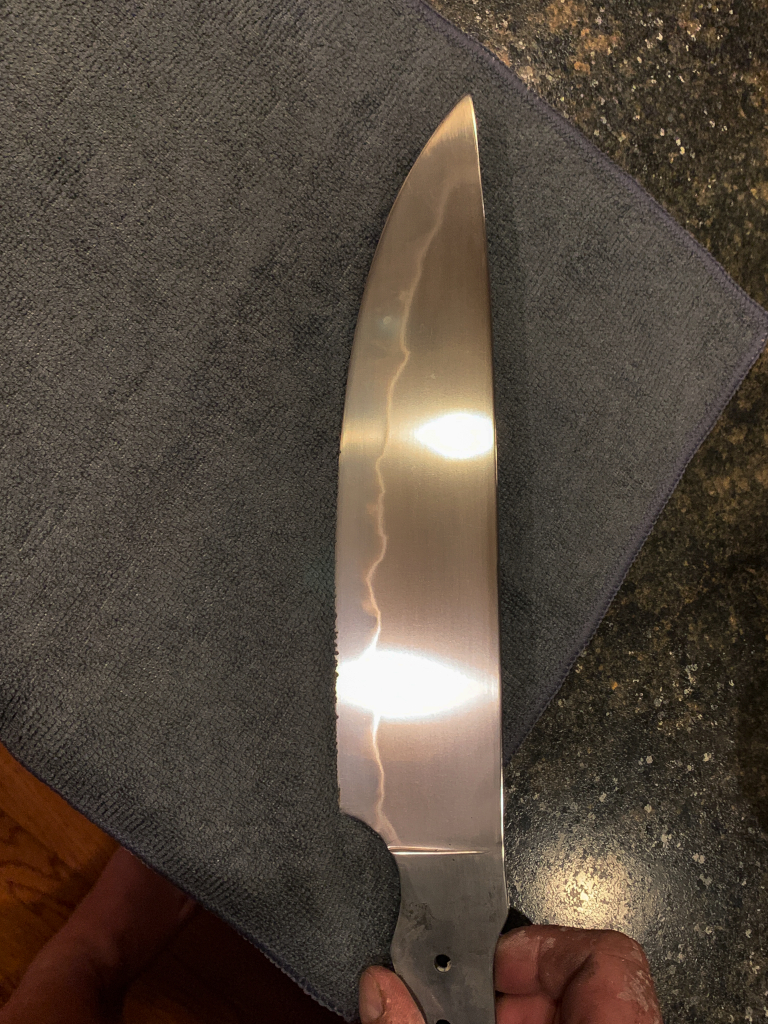 A block of Burma Padauk 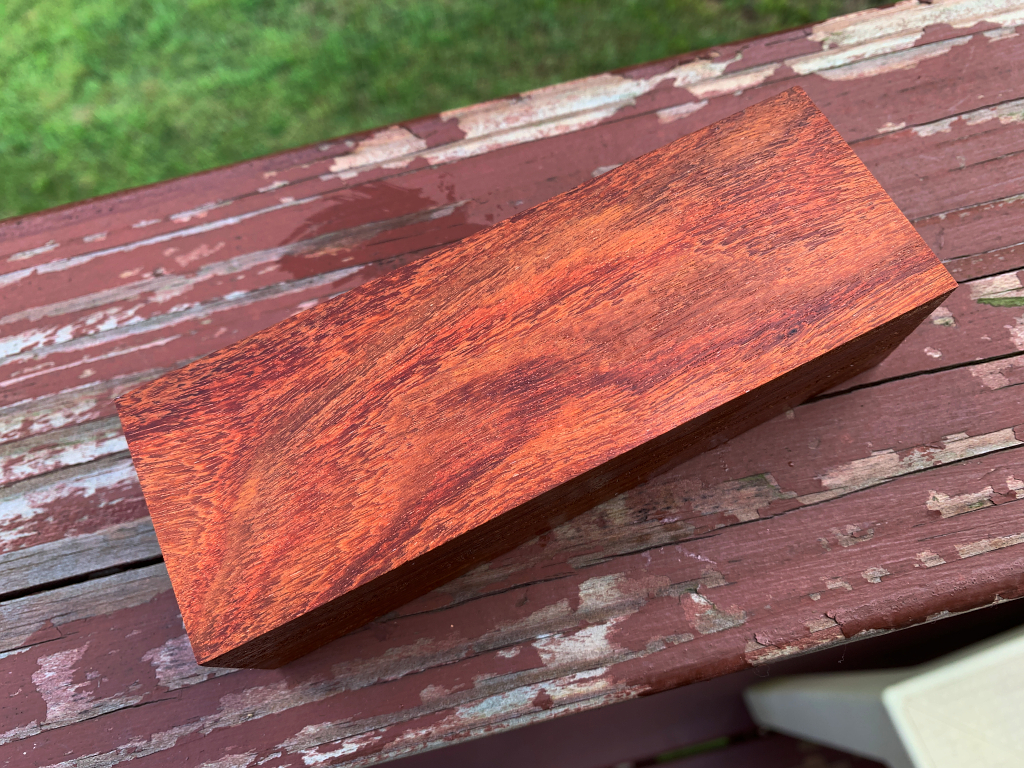 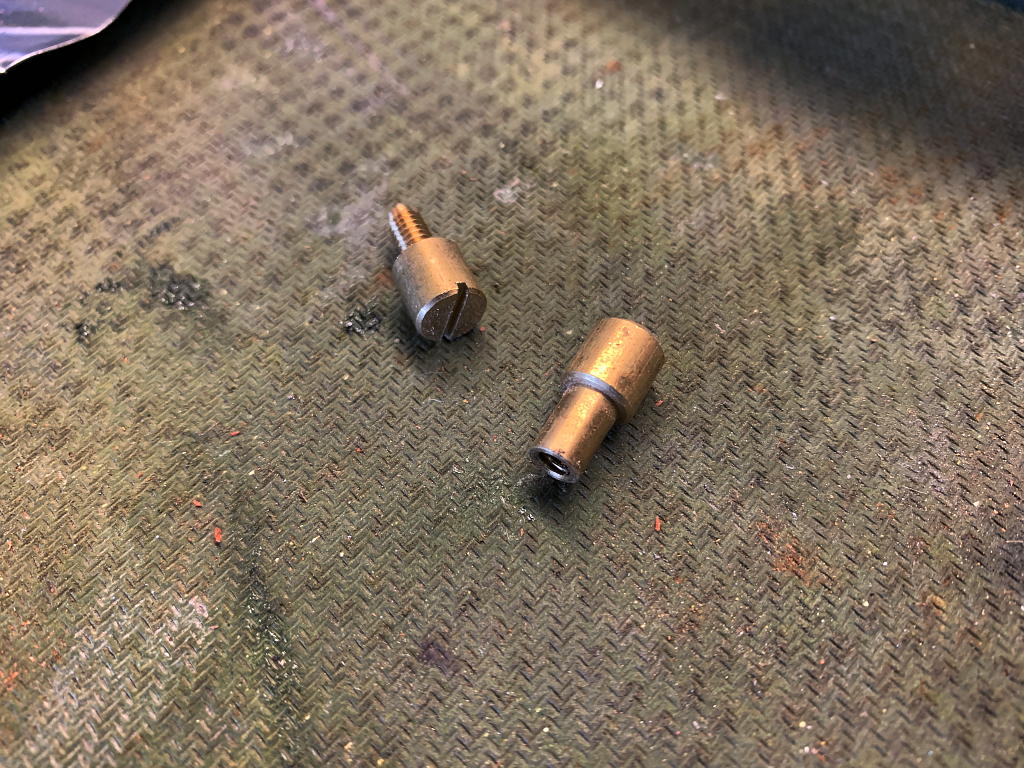 Slicing it up on the band saw 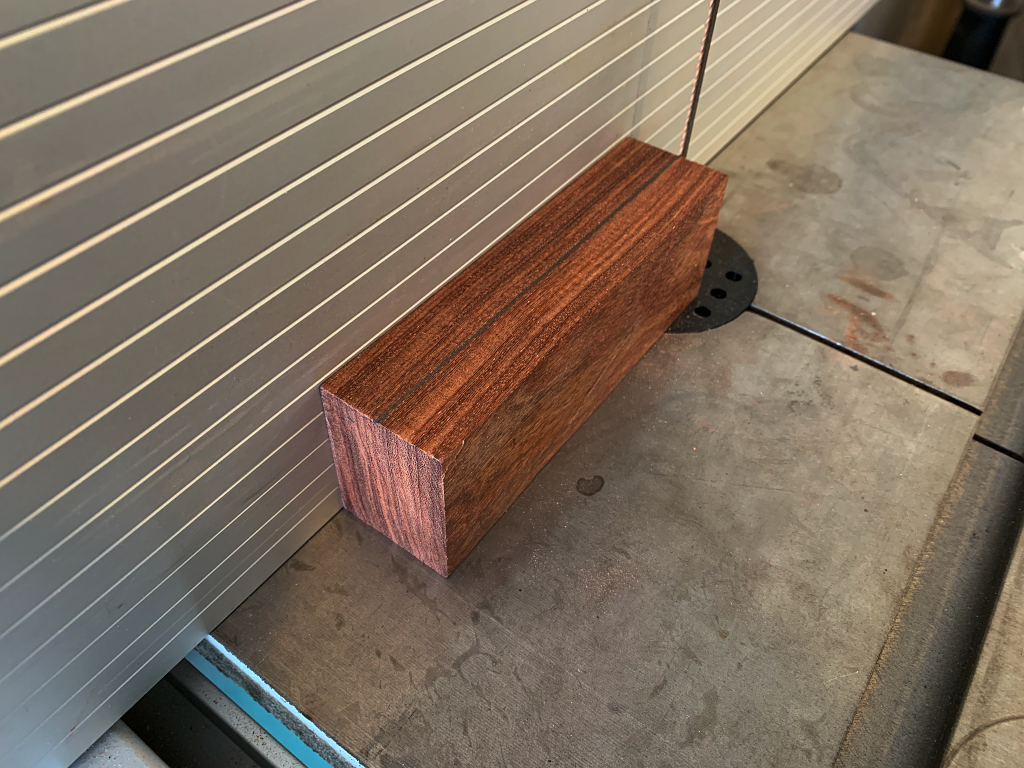 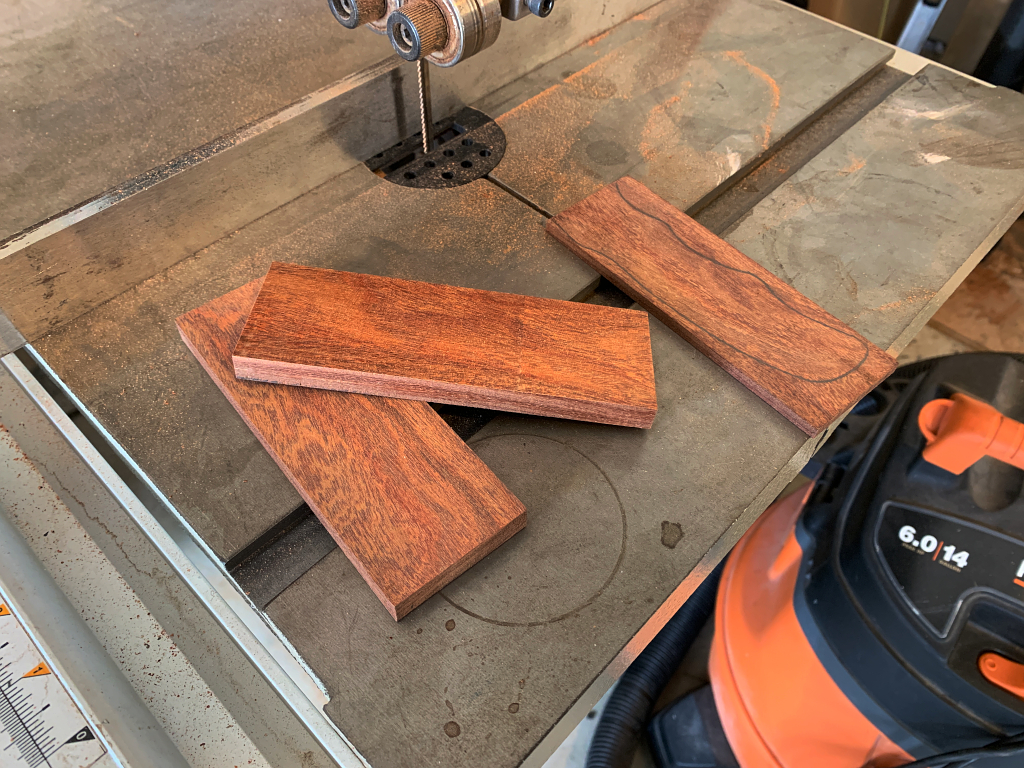 I use epoxy and corby bolts to hold the hand on. The corby bolts do most of the work holding the handle scales to the tang. the epoxy is more to seal the wood to the metal and prevent moisture from getting in between where it can begin to rot. 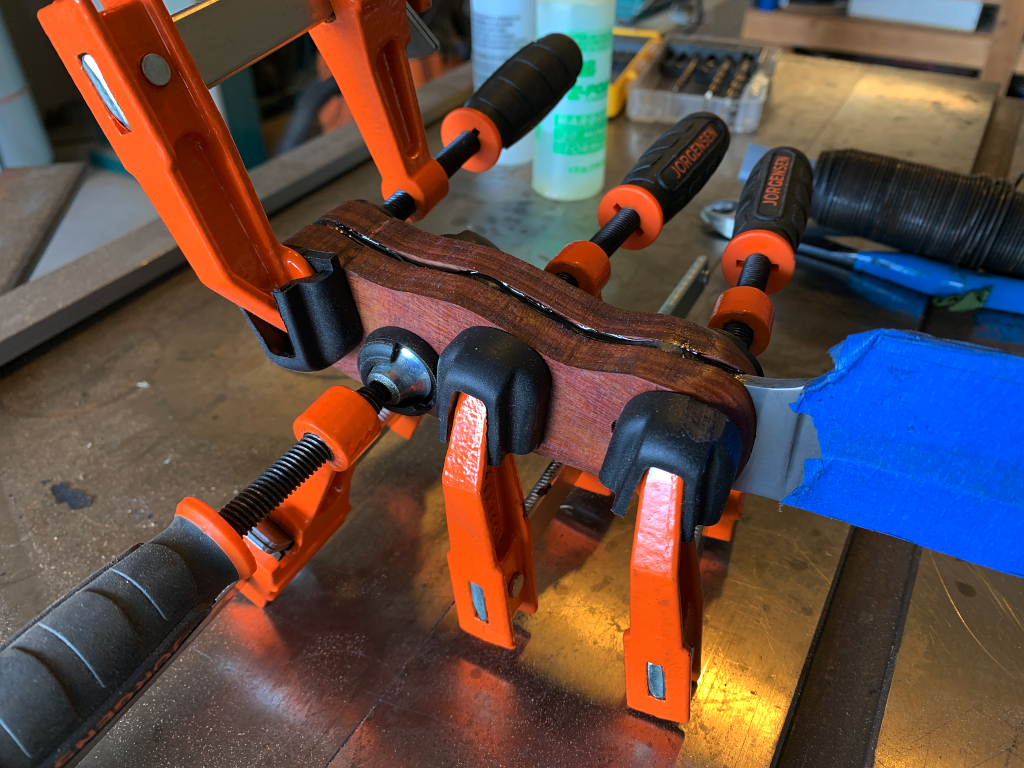 Once the epoxy is cured the handle is ground/sanded to shape. The slotted heads of the corby bolts get ground flat leaving a nice, clean, attractive finish. 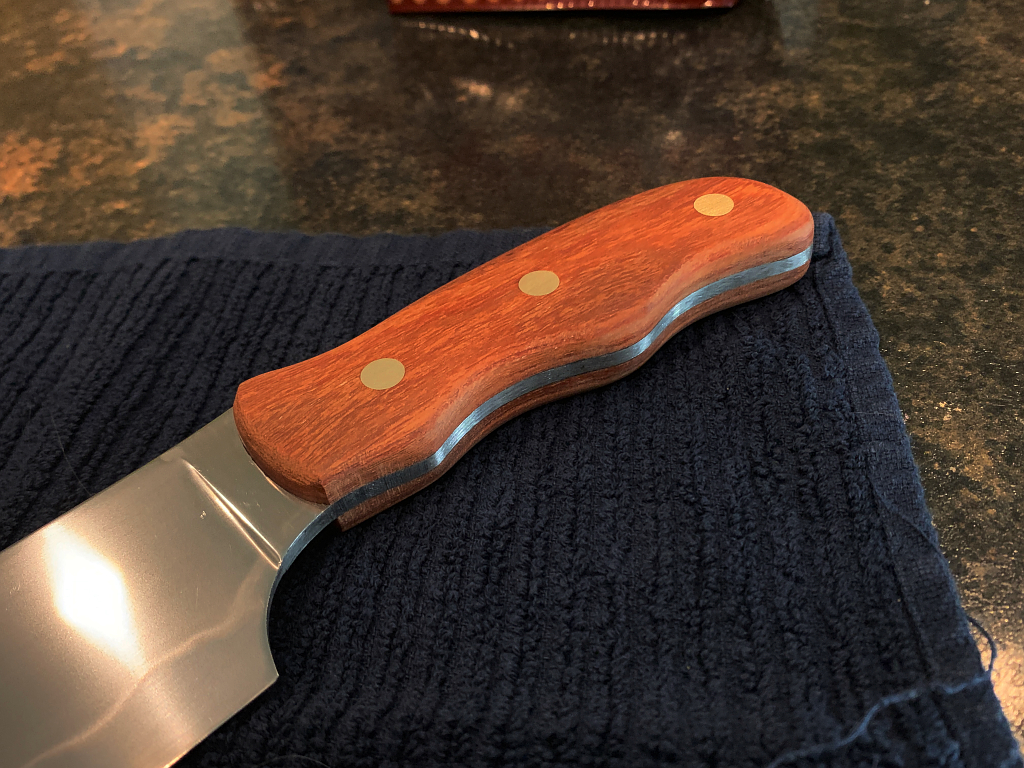 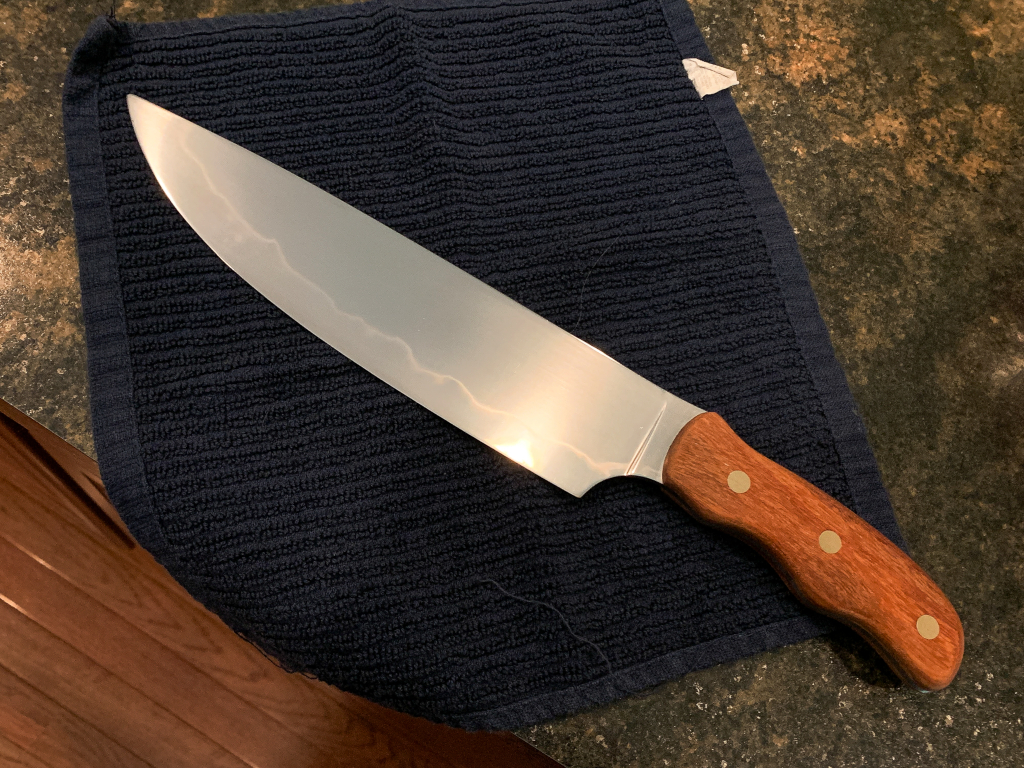 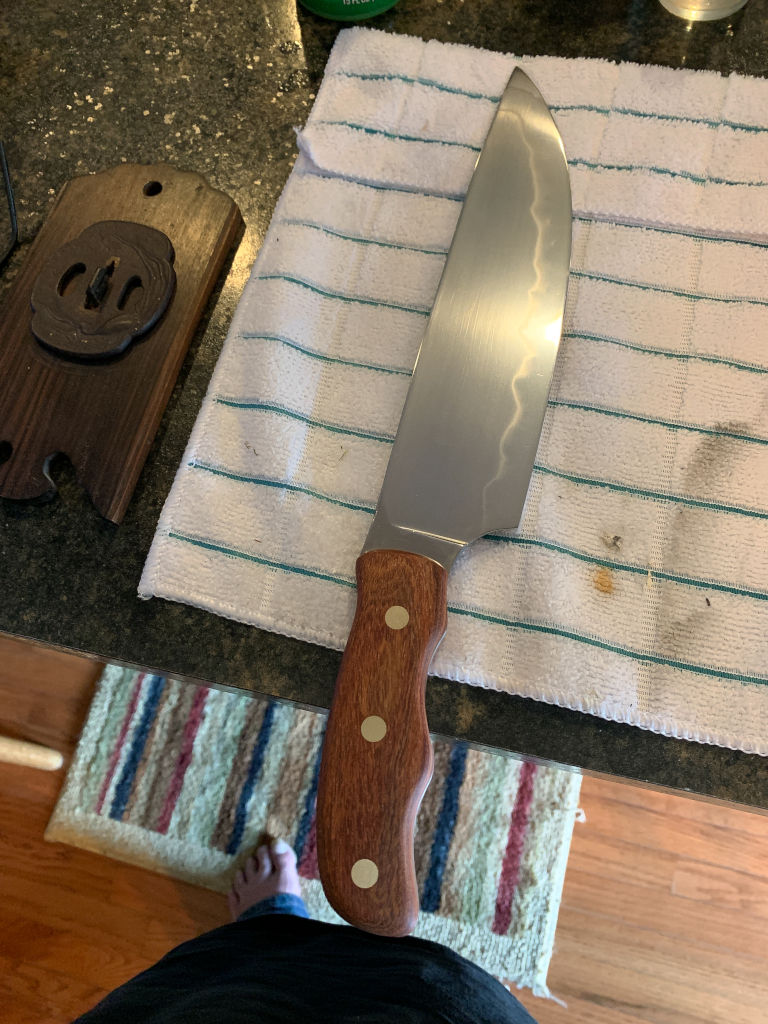 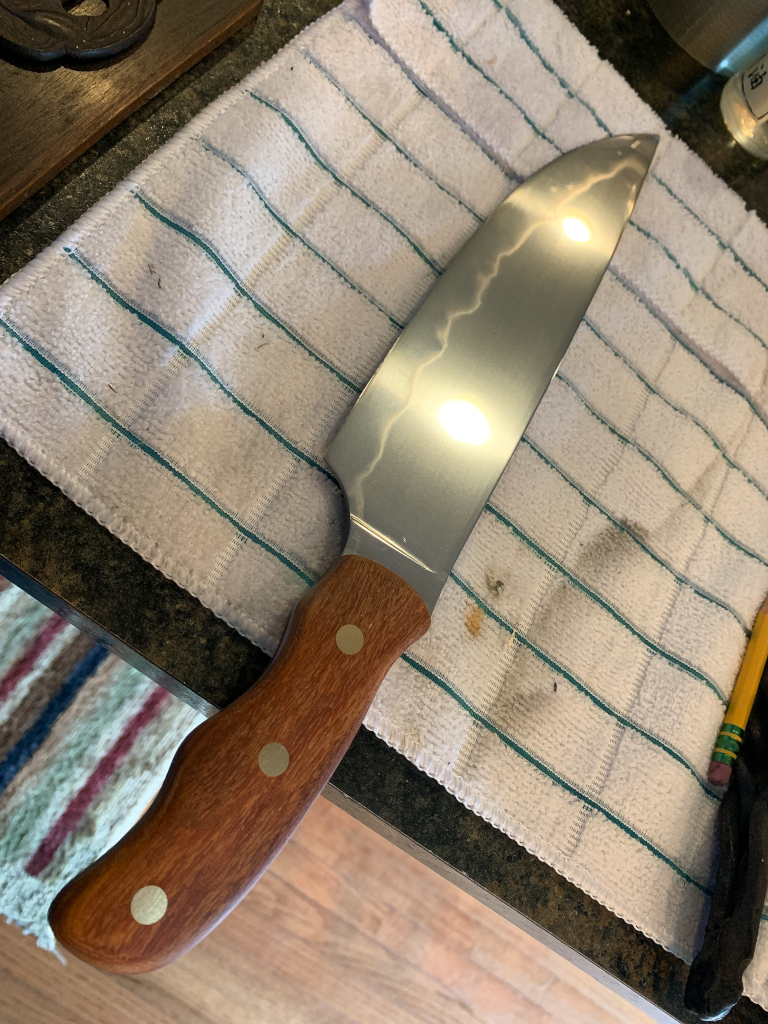 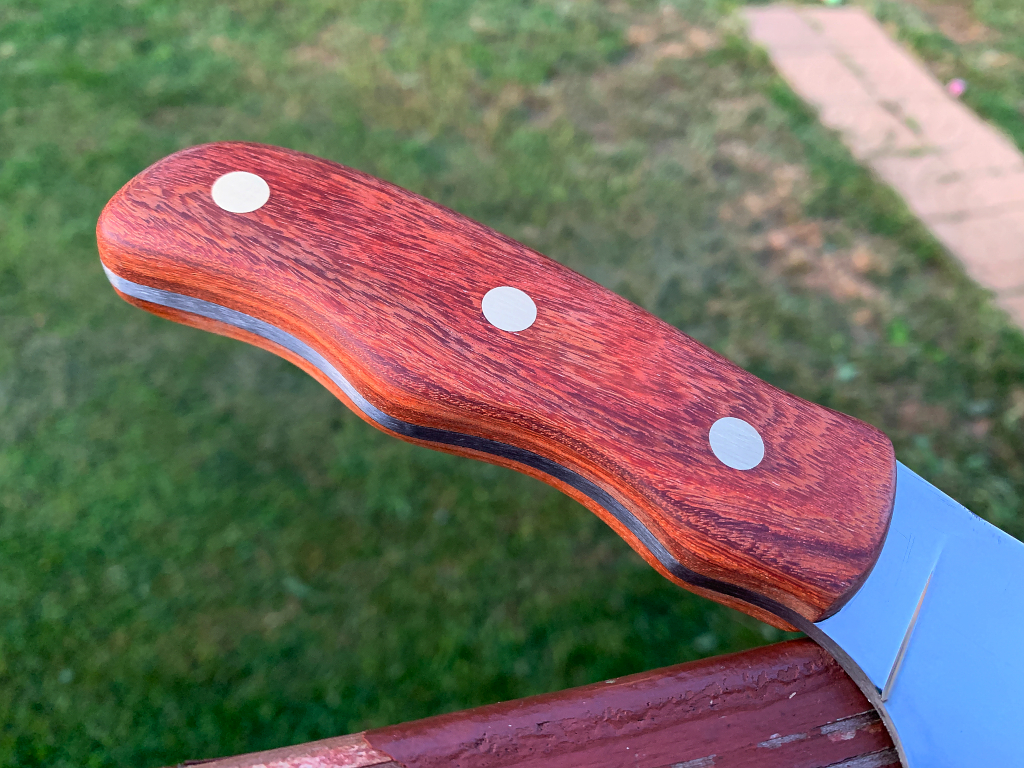 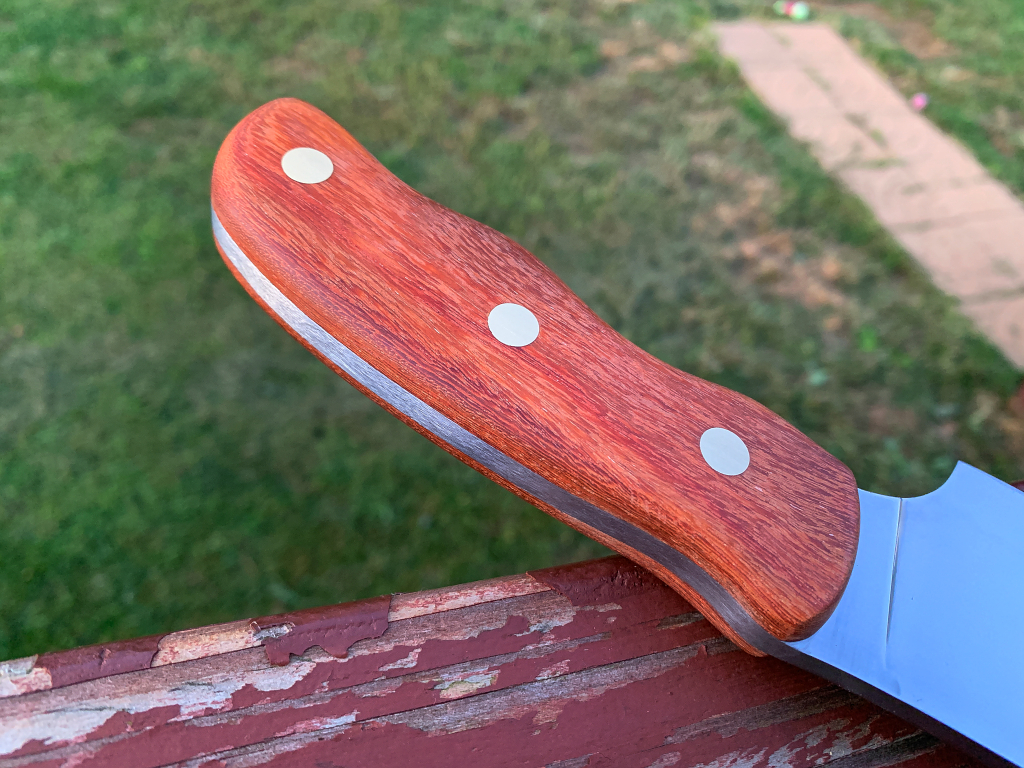